Posted on 22 April, 2013 by Sören In Economy, Fossil fuels, Sustainability

A burning planet “or” scorched economies…

Whatever idea, whatever opinion, whatever calling you have in life, it is very hard to pursue your goals if there is no liveable planet to do it on – It is as simple as that!

Our current “western” lifestyle is overexploiting our available resources and breaking the planetary boundaries – we need to get back in Balance, and we need to start NOW! 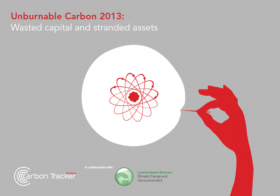 This report by Carbon Tracker and the Grantham Research Institute calls for regulators, governments and investors to re-evaluate energy business models against carbon budgets, to prevent $6trillion carbon bubble in the next decade.

The report shows that since 2011 the “embedded carbon” on stock exchanges around the world has increased, with up to 31%. At the same time, the scale of the devastating risks posed by unmanaged climate change is becoming increasingly clear to us all – except maybe to the financial establishment..!

“The financial crisis has shown what happens when risks accumulate unnoticed (?)”

Science undeniably tell us that if we are serious in our wishes to keep living on this planet, for generations to come, we have to stop burning fossil fuels at our current rate.
The UN, COP (Conference Of the Parties) has failed to set a proper roadmap for this, in spite of 18 meetings, but One thing they have agreed on is that we cannot allow global warming to go beyond + 2 C°. 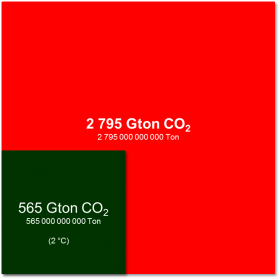 Reports have shown that the current reserves of fossil-fuels outnumber the “allowance” we have, to stay within the +2 C° limit, by approx. 5 times!

At the same time the top 200 oil and gas and mining companies have allocated up to $674bn in the last year for finding and developing more reserves and new ways of extracting them…
Is this an “unnoticed accumulation of risk” – If that is the case, the financial system surely must be Dysfunctional.

The British researchers are warning (?) that effective action on climate change could trigger a new global economic crisis by devaluing the price of fossil fuels and Citigroup conclude that we’re going to do nothing about the end of civilization because it’s economically inconvenient…!

Should “economical inconvenience” keep us from saving our civilization?

The 80% of our known fossil-fuel reserves that needs to stay in the ground if we are going to continue living on this planet, amounts to approximately $20 trillion in assets.
These assets belong to some of the richest corporations in the world – the costs that inevitably will occur from the increased negative effects a continued burning of fossil fuels will bring is going to affect us all, starting with the poor…

Watch this film from 350.org (44.53 min) where Bill McKibben and friends tell the full story.

Let us start this “inconveniant” journey, and let’s start NOW!