Illusions, straight out Lies or Facts, what‘s it going to be…?

Posted on 27 February, 2017 by Sören In General, Social, Sustainability

With a staggering increase last fall, in the wake around the American election, a general impression is that the significance of FACTS has become more and more challenged and watered down – in favour of “alternative facts”, “perceived truth”, “opinions”, “biased interpretations” and straight out Lies.

Populism is thriving and gaining ground – not only in the political arena but also in a more general sense. Lobbyists exploit, and often even distort, facts to promote their specific agendas.

In todays complex world, with huge challenges ahead, people are prone to go for the
“easy way out”, searching for simple answers to complicated and complex problems.

This is an extremely worrying development. Especially if these “alternative” or “perceived facts” are not disputed – if they are allowed to go unchallenged.

Facts do not cease to exist because they are ignored

In the history of mankind, it has never before been so easy to access huge amounts of facts and data. But accessibility to data alone is not equal to knowledge – data need to be fact-checked and adapted to the actual context. Data also needs to be compiled in a way that it can be correctly understood.

This is what scientific research is all about – challenging a thesis, an idea, searching for impeccable proof of concept, regardless if it supports or opposes our wishes.

Problem is that most of us are not scientists; we don’t address data and facts served to us with the scepticism of a scientist – and we do seldom allocate the time necessary to make sure that the data are correct.

Internet gives us unprecedented opportunities to not only access data but also to compare data from various sources. However, it is also an excellent promoter of tailor-made data designed to suit anyone’s preferences or needs.

…in our interconnected society, facts seem to have become some kind of “Variable”.
A variable that apparently can be designed to suit anyone’s preferences or needs, and it doesn’t even have to be true, any allegations are OK…

Would you go for Facts scrutinized and reviewed by an overwhelming number of acknowledged topic experts, or follow an imbecile statement…? 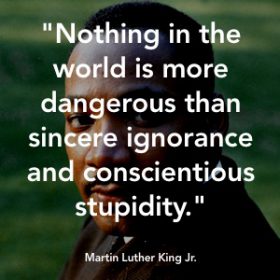 If someone “get away” with a lie, others tend to “follow”. Following some new anti-social paradigm stating that;

Is it sincere ignorance or conscientious stupidity, or perhaps a manifestation of total indifference?

It is rather saddening that, 240 years after Thomas Jefferson – one of the American Founding Fathers, the principal author of the Declaration of Independence and later the third President of the United States – stating that…

“He who permits himself to tell a lie once, finds it much easier to do it a second and a third time till at length it becomes habitual.”

…is to be followed by someone who has made lying a habit!

Denial of proven and verified Facts is equal to…

As with scientific facts, it is valid in law that a statement must be proved beyond any reasonable doubt for it is deemed to be true.

Is what we are experiencing now a first step towards a world where truth is no longer important, where facts no longer is the foundation for decisions – where [some] people are in denial of any scientific authority or established knowledge…

According to Wikipedia Anarchy is the condition of a society, entity, group of people, or a single person that rejects “hierarchy”.

In practical terms, anarchy can refer to the curtailment or abolition of traditional forms of authority – this is equally relevant when referring to scientific facts or knowledge authority.

Facts, do change over time.

Just because something seems invariable, it doesn’t mean that it will never change.
This also applies to facts. Increased knowledge and changing circumstances can also affect facts. Some facts are naturally more susceptible to change than others, such as “Laws of Nature”, but following scientific scrutiny and evidence-based research all facts are susceptible to change. Trigger point being “scientific scrutiny and evidence-based research” – not wishful thinking, personal preference or narcissism…! 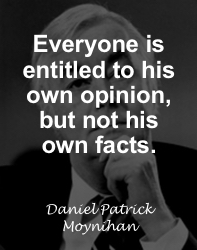 Recently I heard a heated discussion where one of the debaters was fully convinced that the status quo of the conditions for his activities will never change. He had built his whole line of arguments based on this notion. And even though there is no doubt what so ever, that a couple of the pre-conditions he referred to, for his business, inevitably will change if humanity is to survive on this planet, he wouldn’t let that fact interfere with his line of reasoning.

This could of course be fatal to his activities/business. The list of business-failures due to inability to realize “changed conditions” is long (Facit, Kodak, Peabody…) But the real problem is if he/she is successful persuading others to ignore or misinterpret essential facts, and even worse if they are being fed straight out lies.

Facts are not equal to “opinions”, “wishes” or “preferences” – Facts are proven and verified.

It can never be too overstated – Fear and anxiety are triggers of irrational thoughts and behavior. There are a lot of scientific studies about this and, reading more on this topic, it is also quite clear that irrational fear and thoughts cause anxiety thus creating a “vicious circle”.

This is probably why fear mongers, even though they peddle straight out “Lies” or their own biased versions of the facts, so successfully can get people to listen – when afraid you are not always acting rationally…

An example – is this fact-based picture making you more cautious when taking a bath or does it trigger something else?

Are You being Rational or Irrational…?

The opportunity to steer people through “irrational thoughts or anxiety” has been used by propagandists, populists and campaigners for centuries – The Roman empire, Hitler/Goebbels, Mussolini and now the Trump-administration are all utilizing and thriving on peoples irrational fears.

They often use prejudices setting different groups against each other and scare tactics making people anxious of “the unknown” – building on peoples fears, creating a platform for irrational thinking, allowing for them to deviate from the truth, avoid scientific facts and rational thoughts and giving them an opportunity to introduce their own rogue agendas and “alternative facts” as a simple solution – A way out…!

Fear and anxiety is also being used in marketing, although in a more “subtle” manner – consumers are made anxious about their age, their weight, their outfit – to make them use rejuvenating products, to choose “low-cal”, to fit in to specific “role-models” etc. And even though people often are aware that they are being cheated, they buy products – irrational!

When mankind now faces some of the most challenging trials we’ve ever faced – Our survival on this planet – it is perhaps not surprising that populists are trying to portray a world without limits, a world where all problems can be easily swept under the carpet in anticipation that future generations are expected to solve them…

A couple of familiar quotes recently circulated in social medias illustrates what, to some people, seems to be the “trending strategy” for the way forward.
(Read more on the probable and despicable “origins” to these quotes – Here)

“You tell people a lie three times, they will believe anything. You tell people what they want to hear, play to their fantasies, and then you close the deal…”

“If you repeat a lie often enough, it becomes the truth.”

Humanity is at a crucial stage in its continued development.
We need fact-based rational thinking and urgent action if we want to survive on this planet – not narcissism, greed, lies, dictatorship and fear-mongering…

You can believe in the fear-mongers and liars – or you can search for indisputable, scientific facts – What’s it going to be?

“The secret of freedom lies in educating people, whereas the secret of tyranny is in keeping them ignorant.”