Posted on 9 October, 2013 by Sören In Change, Economy, Sustainability

It is amazing how people always return to “single issue” thinking, whenever things become complex – we try to see/solve things “one at a time”, without any or little interconnection.

Last couple of weeks there has been some debate on the issue of “Climate Change” in conjunction with the release of the latest IPCC-report. (See previous article)

Denialists have been advocating that there are too many “uncertainties” etc. not seldom breaking down the issue into small pieces that they argue can be “suspicious”…
– Am I missing something or “Where is the big picture here?” – are they suggesting that we shouldn’t worry, that our overexploitation of Planet and People should continue…
Are they totally oblivious to all other signs of fatigue in our society – or are they maybe “gaining” from it…

Last week I saw two documentary-films with focus on our global economic system – I am not an economist, but – isn’t that a “rogue” system with fatigue…

World Economy – the greatest “Ponzi-scheme” of all…?

Some “non-scientific” reflections on the global financial system… 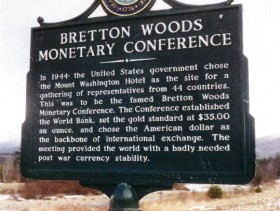 In July 1944 the 44 allied countries gathered at the “United Nations Monetary and Financial Conference” in Bretton Woods, New Hampshire.

At that meeting the countries agreed that instead of using gold as the base for their currencies they created an exchange rate pegged to the US dollar. The US dollar was then fixed to the value of gold. The reason for this was to create a more flexible and “open market”, in a way it also marked the end of economic nationalism.

Given some possibilities to adjust exchange rates, currencies where still backed up by gold.

The heavy US spending during the 50:s and 60:s (social reforms, man on the moon, Vietnam war, Cold war etc.) made a lot of countries uneasy, wondering if the US was not printing more money than there was gold in the reserves… This lead to a situation where the US had a deficit, and other countries at the same time wanted to exchange their currencies for gold. 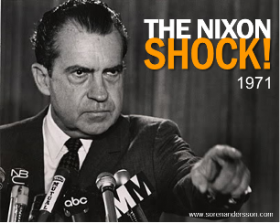 On august 15th 1971, Richard Nixon unilaterally declared that the fixed link between the dollar and the gold was removed (The Nixon Shock), and since all reserve currencies around the world where pegged to the dollar, their link to the gold was also consequently removed – currencies became FIAT-money…

…a decision that may qualify to be the “dumbest decision ever” – the very “root” of economic turmoil, finance bubbles, inequality and also the base for excessive consumerism in our society…

FIAT-Currency can be described as money without intrinsic value. It is not backed by the value of any physical quantity only by the “promise” from the government in the country where it is issued, that it has a certain amount of value…(?)

It is thereby also extremely reliant on a politically well-managed government since the only backing is the credit rating of the country economy and the ability of the country to “pay its dues”.

An economic model without debts

In a previous article (Link) I made a reflection on the severe flaws in the economic models that have been used during the last 30 years – models that don’t include debt…
Compared to the IPCC models these models have no or very little relevant science background or as chief economist of the World Bank and Nobel prize winner Joseph Stiglitz stated, “Has no theoretical justification”…

In most countries the economic setup is based on taxation – taxes are “balanced” to pay for the public services provided. Whenever politicians (elected by the public) propose some reforms or stimulus or in any other way need to increase the budget it can be financed either through increased taxes or via a loan from the central Bank or other financial institutions, National or International. In return for a loan the government writes an I.O.U. – a government bond.

If the investment is good the “country revenue” goes up and more taxes should consequently flow into the system. Country economics however are very complex and there is also a time-factor involved which makes it very hard to trace the direct effects from a reform or stimulus.

The following years the taxes are supposed to pay for the public services and the mortgage and interest rate on “loans”. If the taxes don’t give a surplus or if further stimulus or other reforms are needed or “promised” the country has to take a new loan and issue more government bonds – this time to pay for the previous loan and interest and also for any new reform… and so on. Within reason this set-up can be used to balance the “good years” with the “bad years”, but there needs to be a balance over time.

If you to this equation add things like business cycles, trends, globalization and redistribution of wealth, “tax-havens”, “tax-avoidance-schemes”, pension-systems and promises, regulations and other pledges made by government to its citizens – it becomes a highly complex equation.

Fact is that politicians and economists around the world have been promising their citizens so much and simultaneously misjudged other factors, that most countries have amassed a considerable debt over time and are today paying huge amounts in mortgages and interest on these loans – on top of their daily expenditure…

If country revenue doesn’t increase, so that taxes can cover expenditure and mortgages plus interests on loans – tax-increases or new and bigger loans are necessary to cover the deficit – and so the “Ponzi-scheme” keeps building…

During 2012 the gross central government debt for 58 countries (out of 62 comparable) increased – and for 29 of them with 10% or more… (World Bank statistics.)

Banks create money from “thin air” when they issue a credit. According to old theories these credits are largely issued to investments in production etc. In today’s reality the vast amount of credits instead are issued to speculation or consumption.

In the UK only approximately 15% of issued credits go into the productive sector
(building infrastructure or new production plants etc.)

And the result – Debt levels have increased rapidly. In the world’s largest developed and emerging economies, with 33,000 billion dollars or 20% of GDP between 2007 and 2012, according to the Bank of International Settlements. The British economist William White argues that the situation is reminiscent of the Lehman Brothers case – But worse.

Another phenomenon has also begun to appear. Increased credit to fuel growth seems to work less and less efficient. E.g. Sweden, total liabilities increased from 429% of GDP in 2007 to 490% in 2012, according to figures from “Statistics Sweden” – Yet GDP per capita showed no increase at all.

Have we created a system that not only requires high leverage in order to create economic growth, but also needs a continuous increase in leverage to function – what is the implication of this – as Adair Turner, former chief of the FSA state: “This must be wrong, it must be dangerous”

The total debt, Governmental and Private, has increased dramatically in the world, and is today a total equivalent to 313 percent of the global GDP, according to the bank ING.

The World economic systems seem to be based on a dream that growth is infinite – and yet all production and economic activity is somehow connected to the use of natural resources.

A recent prognosis from the UN, states that the population on the planet might exceed 9.6 billion already by 2050 – with business as usual this means that we will need almost 2.5 planets of “renewable resources” to support us, plus huge quantities of non-renewable resources (and quite a few of them are already becoming scarce)

There is only ONE Planet – that’s an undisputable fact!

An economic system built on the value of political promise, a FIAT-currency; with the current inability to realize that all promises together, on a global scale, has to fit within the physical boundaries of our planet, will eventually fail or bring havoc on the Planet.

But urgent political ACTION is necessary to fit the 9.6 billion to the ONE planet we have.

Whether the threat of havoc to our human society comes from a failing “FIAT-currency-system”, from a credit-industry gone “rogue” or from Climate Change – doesn’t really matter, the winner of that “race” will inexorably bring “the others” along…

We have a huge System-Error and if we don’t fix it – it’s GAME-OVER!

PS:
One of the documentary’s I referred to is “End of the Road: How Money Became Worthless“
(Watch trailer here) the full film is available via “100thmonkeyfilms.com” Link.($4.99)
In Sweden the film is available for free on UR-Play until 2014-03-30 via this Link.

The other film referred to is actually a three part “lecture” by Adair Turner available on YouTube. Part 1, Part 2, Part 3.