While arguing about diagnose and treatment – the “patient” died…

Posted on 2 October, 2013 by Sören In Climate, Sustainability 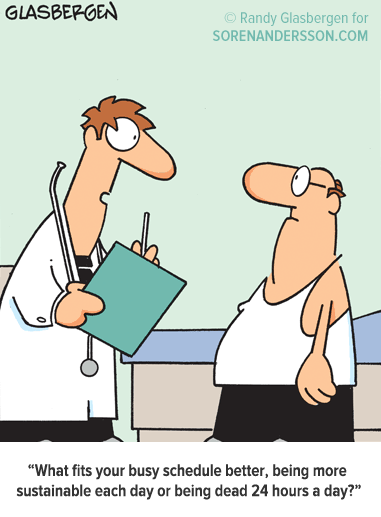 Last week the IPCC published its latest report on our climate.

The scientist community is now even more certain that the planet is warming and that CO2-emission from human activity is the main cause.

And although these facts are not new, only more emphasised, the majority of governments, corporations and people are still not seriously addressing the issue.
Instead the focus is as always, on money, profits and continued consumption and growth…

If someone told you that the risk of a serious incident or crash when flying has increased and is now at an “alarming” level of 1.8% – Would you still travel by plane?

A 1.8% risk when flying would be equal to more than 1,500 serious accidents every day, with roughly 125-150,000 casualties every day, compared with today’s approximately 30 accidents per year – Would you still travel by plane…?

According to the latest IPCC report it is a 1.8% risk that the global warming becomes 6 °C or more – a scenario that, with very little doubt, would lead to a totally different world where humanity, no longer can exist. – Would you consider this risk negligible?

Already at an increase of 1.5-2 °C the consequences will be severe, if not even gigantic and with our current, increasing, emission-rate we are bound for between 3-4 °C… the risk-level for these scenarios are way, way higher…

Why is it still regarded “OK” to postpone, delay, deceive, “greenwash” or in any way avoid taking serious action to prevent and reduce our GHG-emissions – when it is beyond any reasonable doubt that it jeopardizes, our very existence on this planet… or as economic expert, Nicolas Stern stated in a recent article:

Why is it so extremely difficult to understand that Sustainability is not an “add on” – it is the fundamental base for our continued existence.
It’s not something that can be addressed only if we can afford it, it doesn’t vanish if we postpone it, it only becomes more costly and at some point soon it will become unattainable!

Sustainability includes People, Planet and Profits – it is an including approaches not an elimination process. Sustainability “occurs” when these three “P” are balanced – one doesn’t happen unless the others are affected…

“The elimination-track we have tested already, putting Profits way, way, way above everything else – look what that brought us…”

Often when Sustainability is brought up, Executives and Business people become a bit reserved, sometimes sceptic but very seldom enthusiastic. Could it somehow be due to lack of experience or knowledge, a belief that the three parameters cannot thrive simultaneously or could it be the “elimination-track” where executives and business people just want to continue to play in “splendid isolation” and where more parameters would obscure the simplicity of having only one goal…

I don’t know, but I think it is very unwise to be prejudice about this – so let’s stop the speculation and instead try to find common ground – One thing we can definitely agree on:

A very good friend of mine, who also happens to be very much into doing “business” and making profits concluded his standpoint on sustainability and what is currently happening with our planet after a long, late and rather wet “session” at a local bar:

“I’m not a total “dumb-ass” – if business is destroying the planet, we have to change the rules, no problem – I’m pretty sure that I can figure out a way to do business even with a different set of rules…”

(Nils – if you read this, there is no royalty involved, I understood it as a piece of free wisdom from someone I hold very dear…)

An anecdote
“Once during my, at that time, compulsory military service which I spent at the “Swedish air-force academy”, I was offered a ride in a jet-fighter. One experience that I particularly remember from that ride was when we after a rather hasty take-off reached our flying altitude and the pilot levelled off and adjusted to cruising speed – after the enormous acceleration going up in the air, it felt as if we entered a “free-fall” – when in reality we just slowed down a little and adjusted to a horizontal position… it was not an all that pleasant experience.”

Isn’t this a little bit similar to what we need to do as a society – we need to slow down and adjust our level, when it comes to consumption, profits and a whole lot of other things.

We need to fit a population of, very soon, almost 10 billion people at a decent living-standard on the ONE and only planet we have – there is No Option!

Being used to what has been a constant acceleration (growth) this will feel “a bit unpleasant”, but it is in reality not a “free fall”…

Alternative is to continue on full throttle, ignore the flashing warning lights and eventually run out of “fuel” – then we are really talking about a free fall – and there is no gliding capacity, ejection seat or parachute to save us… it’s truly “Game over”!

Diagnose is clear, risks are “immense” – time to stop acting as if there is an option.
– Let’s get on with the treatment!