The Door is about to close…

It is disheartening to see so many people and corporations still trying to create a fictive “choice-situation”, pretending that we can somehow choose not to address Climate change…

When reading the latest IPCC-report and listening to scientists and people with access to vast amounts of accurate data on what is currently happening with our climate it is absolutely clear – emissions from fossil fuels have to peak within this decade, otherwise we are destined to a climate at least 4 degrees warmer with subsequent widespread destruction of society and environment, as we know it.

We are currently consuming renewable resources at a pace of >150% of what the planet can sustainably supply – even a 1:st grader can do the Math necessary to realize that continued growth and increased consumption under these circumstances is preposterous, but…

…still a majority of corporations, municipalities and states are planning for business-as-usual, as if there is nothing to worry about, as if the acutely necessary changes to our society are in fact never going to happen.

What if we could do whatever we want without any consequences – wouldn’t that be great…
Well, isn´t that what we have been doing for decades now, except we have blatantly ignored the consequences, and still do.

Let’s compare the level of Prosperity of Countries with their per capita Ecological Footprint.

The Social Progress Imperative’s, “Social Progress Index 2014” gives a good overview on how countries perform based on Basic Human Needs, Foundations of Wellbeing and Opportunity. In short it gives a far better view on a country’s “Prosperity” than the hopelessly outdated GDP.

The WWF, Living Planet Report 2014 gives a good overview on how countries perform when it comes to per capita Ecological Footprint.
Note that it show performance as “demand” correlating pretty well to “consumption-levels”. Also note that it only deals with Renewable resources and doesn’t include non-renewable resources other than the CO2-emissions from burning fossil fuels.

Now lets’s compare the top-ten countries when it comes to Social Progress and a look at their Ecological Footprint. 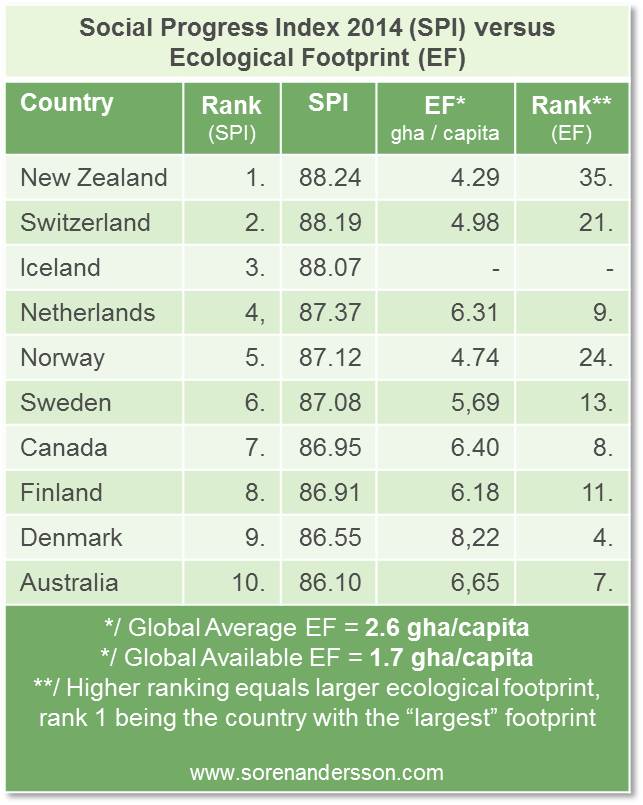 The Social Progress rating gives a good measure of what is generally regarded as, “Good Quality of life” and what is often regarded as the “Rolemodel” for others to follow.

The top-ten countries are all among the 35 countries in the world causing the highest demand and “stress” on our Planet.

All of them have an Ecological footprint well above the Global Average and more than double what the planet can sustainably provide, if it was to be equally distributed.

The only conclusion possible is;
“A prosperous life, as currently defined, can never be achieved for the many people”
…the planet has no chance what so ever, to support consumption at the levels currently related to “prosperity”.

To discuss or measure Prosperity or Social Progress without including and properly value the consequences to our planet has no relevance at all – We are not the stewards of the planet, the planet doesn’t need us – We need it!

Another conclusion;
Promoting role models and lifestyles so obviously damaging the planet and the opportunity for coming generations to live a decent life is an utterly unethical and egoistic behavior.

And the reaction is…

…to large extent missing – instead more of “Business-as-usual” is planned by corporations, municipalities and states.

And the list just goes on and on and on…
…as if there will come some “technological fix” solving everything at some undefined moment in the future.

But what about ordinary people…

…take a critical look around you!

Have you experienced any significant change in people’s consumption-patterns?
Are the parking-lots outside the shopping malls less occupied?
Is car-sales reduced (Volvo, the Swedish carmaker, recently reported all-time high sales)
Do people avoid going on far-away vacations via airplanes… Have the ideals and what is regarded as “successful” changed?

And what about you – in what way has the debate about Climate-change and diminishing resources really changed your behavior?

…and I mean “Really changed” – take a look at the Ecological Footprint chart again and compare the Footprint of your country with the 1,7 gha/capita the planet can sustainably deliver.

What a suitable name for a day celebrating extreme consumerism – Black being the color of “grief and mourning” and all…
In a world so highly devoted to consumerism isn’t it unbelievable that there actually is a day specifically set aside for even more excessive consumption – like an already rogue business on steroids.

…and the medias then boasts about this with big Headlines, telling everyone that this year’s Black Friday spending outnumbered the previous years – just like every year…

With soaring consumption emptying our planets resources at a rate of >150% of what it can sustainably replenish – what is there to celebrate – the fact that if we continue like this, pushing consumption to ever higher levels, our children, grandchildren and generations to come will suffer while paying for our extremely selfish behavior…

…and it is just the start of the shopping-frenzy surrounding Christmas and New Year celebrations.