Stop the distraction – move into Action!

Posted on 6 June, 2013 by Sören In Change, General, Sustainability

During the last couple of weeks there have been numerous articles on the subject of “G4”, the latest version of the Global Reporting Initiatives reporting system for “sustainability” reporting – to some, this may give the perception as if  “Sustainable Business” is up and running…

“Real knowledge is to know the extent of one’s ignorance.”

Implementing a detailed “scoring-system” on existing business-setups isn’t likely to trigger the transformational and systemic changes necessary to mitigate the treat from Climate Change; instead it might serve as a distraction and delay – A “Green-Wash“.

Auden Schendler and Michael Toffel recently wrote in an article in ClimateProgress: 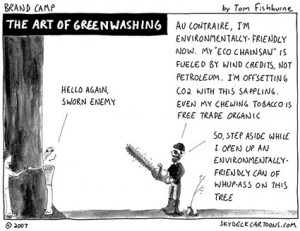 “Green business as currently practiced focuses on limited operational efficiencies – cutting carbon footprint and waste reduction – and declares victory. But these measures fail to even dent the climate problem. And the proof is easy: greenhouse gases emissions continue to rise. This month, we hit 400 parts per million atmospheric CO2 for the first time in 3 million years. Worse though, such small-ball initiatives are a distraction: we fiddle around the edges thinking we’re making a real difference (and getting accolades), while the planet inexorably warms.”

Introducing and using scorecards and reporting systems for “sustainability” in a corporation, could even lead management and shareholders into the “false” belief that everything is well, that they are addressing the “sustainability issue” and that the company actually is “on the right track” – when, in reality, the business itself might not even be compatible with a Sustainable society.

Another quite frequent setup is that sustainability reporting is assigned to the corporate information/communication department – in which case it becomes more of a “PR-feature”. This can be a treacherous way forward. An information department is normally well-equipped to promote company “highlights” both internally and externally, in fact it is one of the basics of their function. But information and PR about sustainability, is an entirely different “business” from actually “being” and operating as a sustainable corporation.
More on this topic in a previous article – Link!

“If a corporation cannot justify that their operation is valid in a sustainable world, pretending so will only prolong the agony – sustainable operations will last and non-sustainable will cease, that’s the basic interpretation of the word Sustainable.”

“Acclaim is a distraction.”

When it comes to communicating about sustainability it is extremely important to understand the importance of “context”. Although more and more people know that there is “something wrong” with the climate, very few understand, or “want to understand” –
the magnitude and effects Climate change will have on all of us.

Today I read a report on CO2-emissions in the EU. Turns out that, during 2012, Sweden was among top three when it comes to reduction – reducing with 10.1 % compared to 2011. When this is presented to the public without “context” it makes people think that we are doing “our share” – we can continue to ”fiddle around the edges” but basically continue the way we are. At the same time “Consumerism” in Sweden is at a level where, if all people on the planet should live accordingly, we would need approximately 3.5 planets to support the resources needed.

Reality is that we have “outsourced” a huge portion of our production to China and other developing countries – countries that are now being “blamed” for being the “bad guys” when it comes to CO2-emissions.

Among Consultants, Architects and Builders within the building industry in Sweden it has become more or less standard to use expressions like “Sustainable design”, “Community builder”, “Society builder” and “Climate-smart” thereby attempting to be perceived as Sustainable corporations.

And yes, today the building industry design and build with a better quality and less energy-consumption; we also try to reduce waste and to avoid harmful materials, but basically the industry still design, develops and build whatever society wants to be built… “business-pretty-much-as-usual”

At the same time IMF (International Monetary Fund) lamented Friday May 31st, that Swedish households pay their mortgages so slowly that they are planning to do an average of 140 years [?]. “Financial stability is […] reinforced by a steady reduction in repayment schedules – that exceed an average of 140 years” the IMF said in a statement after a mission in Sweden

Last year, Swedes’ household debt hit a record 173 percent of disposable income, well above the 135 percent level during the height of Sweden’s banking crisis in the early 1990s. This level of accrued debt and excessive repayment schedules is to “some extent” connected to “consumerism” – and living beyond one’s “means”…

Following the IMF statement, financial analysts made the following comment:

“By the time central banks notice bubbles and begin to discuss ways to alleviate them, it is far, far too late to do anything about them. A housing crash with huge consequences is 100% certain.”

If you are a Sustainable corporation, within the building industry should you, under these circumstances, promote increased building-volumes – any risk that it will further “inflate the bubble”…. or should corporations together with government instead search for ways to solve the situation…
I am not an “economist”, I also presume that there are pro’s and con’s here, and that my reflection most likely is a bit “simplistic”, but the situation is a bit scary…
In such a context, can the use of prefixes like “Sustainable” in any way mislead the public, lulling people into a false sense of security…”fiddling around the edges”…

What should we do then?

– Stop the distraction and move into action!

It is quite “apparent” – the challenge we are up for is OUR challenge, it is not a challenge for some few people, for a specific system or someone else – it is all of us!

When people like Rex Tillerson, CEO of Exxon, at their annual shareholders meeting proclaim “What good is it to save the planet if humanity suffers?” and shareholders later voted 3:1* against setting goals to reduce Greenhouse gas emissions, it becomes quite clear doesn’t it.

Who are they addressing; the almost one billion undernourished people in the world, the more than 30 million people displaced last year only due to Climate change effects, caused by burning of fossil-fuels – humanity is suffering now and further emissions of CO2, further promotion of an excessive consumerism and infinite growth is not going to help.

Corporations that want to be Sustainable need to move away from the shortsighted attitude that their only responsibility is to “maximize the value that they deliver for their shareholders” and that they are allowed to do it based only on “the incentives that the governments offered us to operate.”

They need to re-evaluate their role as a part of the society, to stop “fiddling around the edges”, to be bold and go for action – instead of re-action.

It means helping our society, not fighting it, getting more involved in our society, in politics, financing, taxation, education and all parts our society – not to “lobby” so that your corporation can increase its profits, but to search for solutions that enables our children and their children to also have a chance to a decent life in the future.

It is not about finding the loopholes so that corporations can avoid responsibility, so that you can blame others for not succeeding, it is not about carrying on with “business-as-usual” until, or because, someone else or an out-dated system hinders you – it’s about finding solutions together that can become our new Sustainable society.

We need Transformation, not more of what actually got us here in the first place,
and we need it NOW!

(*/ that is more than 1,400 Institutional and Mutual Funds worldwide with one focus and one focus alone… to enrich themselves and their owners – check them out, “hopefully” you are not one of them….)