CCCXXXVI Months in a row…..!

Posted on 17 March, 2013 by Sören In Change, Climate, Environment, Social

February 2013 was the 336th consecutive month of above-average global temperatures…
This is not a trend, not a coincidence, not a fortuity – it is a CRISIS!
336 months equals 28 years and brings us back to 1985 – Remember what you did that year?

Somewhat Ironically, 1985 was proclaimed by the United Nations as the International Youth Year (IYY). It was held to focus attention on issues of concern to and relating to youth. The proclamation was signed on January 1, 1985 by United Nations Secretary General Javier Pérez de Cuéllar.

“We Are the World” was recorded, Live Aid pop concerts were held in London and Philadelphia for famine relief in Ethiopia, Coca-Cola changed its formula and released “New Coke” (and changed back in less than 3 months) and U.S. Route 66 was officially decommissioned.
Ronald Reagan began his second period as president of the USA and Mikhail Gorbachev became leader of the Soviet Union. Amadeus was awarded Best Picture at the 57th Academy Awards, Nelson Mandela rejected an offer of freedom from the South African government and Steve Jobs resigned from Apple Computer and founded NeXT.

We are currently on a trajectory to an increase of the average global temperatures of more than 4 degrees Celsius – who are we fooling – We are not, but our children are!

The infographic below, from “Information is Beautiful”, is trying to summarize the effects of a warmer planet. (Click the picture to visit their site and to see it in higher resolution) 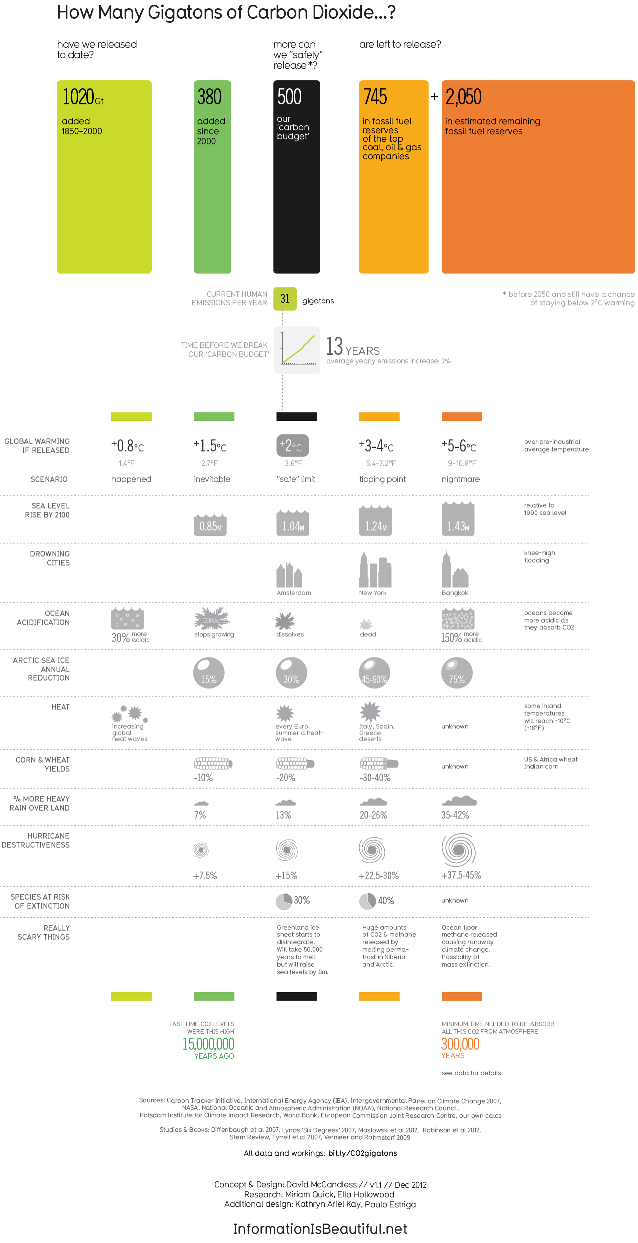 There is an old anecdote claiming that if you throw a frog in boiling water, it will quickly jump out. But if you put a frog in a pan of cold water and raise the temperature ever so slowly, the gradual warming will make the frog doze happily…in fact, the frog will eventually cook to death, without ever waking up….  This anecdote is not quite right.

Read the “truth” and the “tweaked” story narrated in “ClimateProgress”  by Joe Romm here.

Regardless if the story is true, the metaphor is adequate.
We – the people – have a track record of being “slow starters” in need of some kind of “Catastrophe” to get us going…Well, this one we don’t want to experience….

We need to turn down the heat NOW!