Management in a Sustainable future…

Posted on 3 May, 2013 by Sören In Change, CSR, Social, Sustainability 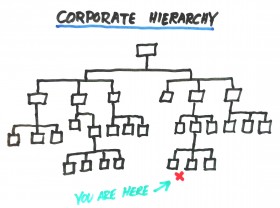 Sometimes when looking at new management books, management training etc. I find it a bit fascinating that so little have changed over time. For instance – how come that playing football still is considered a training ground for leadership, but raising children isn’t.
How come military expressions, titles and strategies are so often used and referred to although strive for individualism is stronger than ever. Why is the metaphor for a career often a ladder?

Today our world is probably more complex and interconnected than ever, but still most organizations are continuously concerned about drawing and re-drawing hierarchic schemes and creating “job descriptions” which they then try to “squeeze” people with individualistic ambitions into, just like decades ago.

Some actually believe that if we first create an ideal hierarchic setup using only “boxes” and “connectors”, then define exactly what functions each and every box should fulfill and then document exactly how this set-up should co-operate, what standard procedures should be used and how each task should be carried out – then we are “home free”…
Comes a “surprise” – Human beings are Individuals!

Are we utilizing the full potential?

How can it be that when Coca-Cola introduces a new jingle they put it out via the internet and just a couple of days later people are humming the tune all around the world, but if the same jingle should be brought through an organization it has to go from level to level so that the career-ladder and the different levels of “authority” is maintained – in an hierarchic organization “knowledge is power” – at least according to “old-school”…

In todays interconnected world, data, facts and knowledge is common property. It is also available to all via smartphones and computers. Today’s most desired skill is instead the skill to interpret all knowledge and data – to make something useful of the abundance.

How has this affected the way corporations organize? – In most cases, not at all…!!

Many managers refer to themselves as being “down to earth” always keeping an “ear to the ground” and so on – make a test in your own organization; how many of your leaders have an “unfiltered” social connection to the many people?
As one inspiring person once said:

It is not power that corrupts – it is the fear of losing it!

It takes time to climb the latter of success, and once someone have reached a “level”, they will do almost anything to avoid “falling down” – things like holding on to corporate information or adding their own interpretation and values to it – not unusually in a way that will benefit their position (increase importance) or possibility to climb further up the latter – very few are unbiased or “unselfish”

This of course works “both ways”; what is the likelihood that a middle-manager should communicate something “problematic” upwards if it should in any way conflict with his/her position and ambition? And it doesn’t apply to problems only; also smart findings and ideas have to go through the same filters.

In some business cultures you can see a slightly more open approach, but so far these are in minority.

During our early years we learn a lot by observing others, we look at our parents and how they do things and then try to imitate that?

Later on during our adolescence we have idols that we try to imitate, like movie stars, rock stars, athletes. Then we go on with role models we think have qualities that are admirable.

In “old” company-structures, once we reach a “good level”, instead we document how things should be done, to the best of our knowledge, so that it can be re-used again and again – Smart!? – If just the world around us would stop evolving as well…

Let’s face it, in a continuously evolving society there is only one way to go if you want to be a successful corporation – Go with the flow!
This doesn’t mean that you must be and do like everybody else, you don’t even need to move in the same direction, but you need to evolve together with the world around you!
If you still feel the need to document exactly how things should be done – make sure the documentation and routines are very, very, very easy to change – and Do change them…!

When humanity now is entering a totally new phase, a sustainable society, old knowledge has to be merged with new in an unprecedented way. Organizations failing to realize this will be in trouble. Simultaneously the generation Y or the “Millennials” are entering the scene…in huge numbers.

We are on uncharted grounds now. The need to address climate change and the underpinning human causes is at a scale and urgency that mankind has never encountered before, so using rear-view mirror management setups is not going to be sufficient.

Most people carrying leading roles in corporations are “old, fat, content and lazy” as one student once told me. Many of us live quite comfortable lives after having worked hard and goal-focused, climbing the latter to get here…. At least if we are asked to tell our story.
Do we really want to change..? Is it “to much work”…?

Hans Rosling, the Swedish statistician, once showed research on how well informed we are. They tested middle-aged people’s knowledge about the present birth rates in Africa and compared with what chimpanzees know – the chimpanzees won! It turned out that almost every person based their answers on knowledge they had acquired during their time in school – often twenty or more years ago… So much for easy access to all available knowledge, so much for “living in the present”. This make, at least, me wonder – What are current decisions based on?

If we are to succeed as a society also in the future, we need people that are well connected to the present, we need people with knowledge and experience, we need people that can make “something useful of the abundance of information”, we need more influence from young people – and we definitely need management structures that mirror this reality, structures where we all Grow Together – not more hierarchies with “boxes and connectors”!