Posted on 2 March, 2013 by Sören In Environment, Water

Normally when looking at pictures of our Planet, it seems very blue and whenever you are standing at a shore-line, looking at the sea, it seems incomprehensible large. Therefore when you read articles about sea-level rise, acidification, water-shortage etc. it is very easy to “shake your shoulders” and think -“With so much water on the planet, it can’t be a problem….”

Time to re-think – Water is far from an abundant resource!

The picture above show a sphere that contain all of our water in comparison to the size of the Earth. The large blue sphere has a diameter of 1,385 kilometres (860 miles), with a volume of about 1,386,000,000 cubic kilometres (332,500,000 cubic miles)
The sphere includes all the water in the oceans, seas, ice caps, lakes and rivers as well as groundwater, atmospheric water, and even the water in you, your dog, and your tomato plant. (Click picture for more information)

When you then realize that less than 2.5% of the total volume is fresh-water (the tiny sphere on the picture), of which 68.9% is glaciers and permanent snow, 30.8% is groundwater including soil moisture, swamp water and permafrost and 0.3% is Lakes and Rivers, it becomes more clear that there might be a problem! 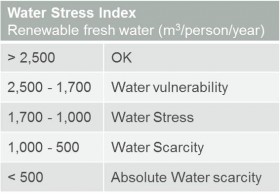 A commonly used measure of water scarcity is the ‘Falkenmark indicator’ or ‘water stress index’. This method defines water scarcity in terms of the total water resources that are available to the population of a region; measuring scarcity as the amount of renewable freshwater that is available for each person each year.

If we then take the about 103,950 cubic kilometres of available fresh surface water  in Lakes and Rivers, which is the most common source for our fresh water supply, and divide with a 7 billion population it is approximately 14,600 m3/person/year – seems OK!

However, this is an extremely simplistic approach and there are a number of issues that we need to consider.

In reality, availability to clean fresh water is becoming an increasingly acute problem in many regions of the world.

All over the world there are numerous examples of poor handling and abuse of water, one of our most essential resources. Untreated sewage poured directly into rivers, over-fertilized fields leaking nitrogen and other substances, oil-spill in lakes and oceans, over usage of water for irrigation – the list just goes on and on. At the same time Climate Change brings a much more extreme climate with unprecedented droughts and floods. The increasing level of CO2 is also making our oceans more acidic.
Not a week goes by without examples of how disrespectful we are to one of our most important resources, some recent examples;

Just in case you needed more reasons to be concerned about the stability of the Middle East, new research using data from NASA’s gravity-sensing Grace Satellites shows a substantial decline in the volume of groundwater reserves in the Tigris and Euphrates river basins. “Grace data show an alarming rate of decrease in total water storage in the Tigris and Euphrates river basins, which currently have the second fastest rate of groundwater storage loss on Earth, after India,” (Read more)

Is it not in this region, Syria, where one of the worst armed conflicts currently is going on and lots of people are living in exile in terrible conditions?

Tarek Kotb, the First Assistant Minister in the Ministry of Water Resources and Irrigation, says; “By 2050, there will be about 160 million Egyptians and only 370 cubic meters of water per capita” – And then add “Climate Change” with increasing temperatures…
(Click picture to read more)

Fracking for Oil and Gas 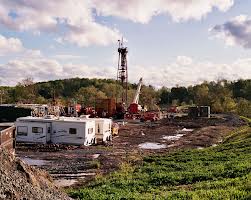 Water is by far the largest component of fracking fluids. An initial drilling operation itself may consume from 26,000 to 2,640,000 litres of fracking fluids, but over its lifetime an average well may require up to an additional 22 million litres of water for full operation and possible re-stimulation frac jobs. Water being mixed with all kinds of chemicals and injected to the ground…. anyone worried about consequences?

Worldwide, per capita meat consumption increased from 41.3 kilograms in 2009 to 41.9 kilograms in 2010. People In the developing world eat 32 kilograms of meat a year on average, compared to 80 kilograms per person in the industrial world.

Raising livestock not only account for an estimated 18 percent of human-caused greenhouse gas emissions, producing 40 percent of the world’s methane and 65 percent of the world’s nitrous oxide it is also a huge user of water and accounts for roughly 23 percent of all global water use in agriculture, equivalent to 1.15 litres of water per person per day.
Production of one kilogram of meat roughly uses 50.000 litres of water…. and we are increasing meat-consumption at a very high pace….

“We forget that the water cycle and the life cycle are one.”

Water – this amazing resource – take good care of it…!