Posted on 14 March, 2013 by Sören In Environment, Fossil fuels

Undoubtedly we will pass 400 ppm of CO2 in the atmosphere this year – an all-time high, a World Record that no one will salute! A record and a curve, that our children and their children will show us and ask – WHY? 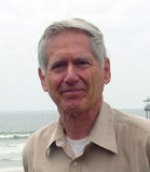 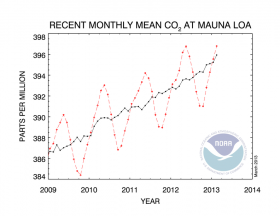 In the early 1960s, the US National Science Foundation stopped supporting his research, calling the outcome “routine”. Despite this lack of interest, the Foundation used Keeling’s research in its warning in 1963 of a greenhouse effect. A 1965 report from the US President Johnson’s Science Advisory Committee similarly warned of the dangers of the greenhouse effect.

Science has come a long way since these early findings and has combined continuous measurements with data collected from research of historic levels of CO2, so that we now have a more complete understanding of the last 800,000 years (!)

The Holocene era began about 12,000 years ago, and equals the period when the human species originated and developed on earth. When we are now entering the Anthropocene era, we are also entering a Climate Reality that has never occurred during the whole history of the human species.

What are we going to answer when our children asks…?

Over a very “short” period of time, 50-100 years, we have managed to disturb more than 12,000 years of “fairly” stable conditions, during which life on earth has flourished. Now that science has given us clear and alarming evidence that We have a problem – we still deny reality, hesitate and delay action…

The only answer possible is:

“2013 was the year when we finally realized the problem and put in force powerful actions to prevent further Climate-Change!”