You are defined by your actions, not by what you say…

Posted on 15 November, 2013 by Sören In Change, Environment, Fossil fuels 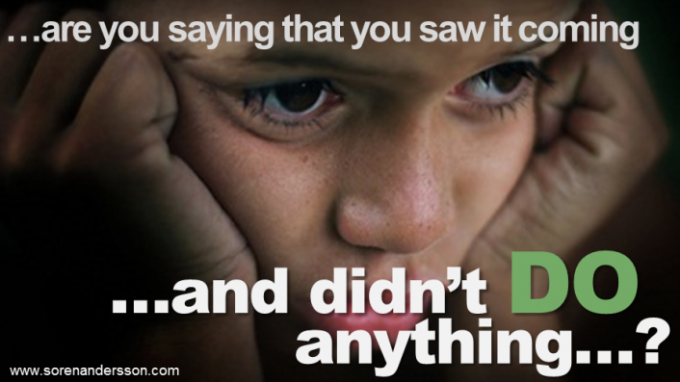 Lately there have been a number of reports and studies clearly showing that most corporations are failing to take any considerable steps toward a Sustainable future. (Link to previous article)

This is truly disheartening and extremely worrying.

“What gets measured gets done”… or Not…

This quote, often attributed to Peter Drucker, is used frequently when talking about performance improvement, but is it right? Should it instead be “Some things that get measured get done?”

There is in reality very little to prove that “What gets measured gets done”.

The latest report from CDP even showed that the 50 largest emitters reporting according to the Carbon Disclosure Project actually increased their emissions since 2009 – and these are among the few actually measuring, what about all other corporations, the estimated 70,000 multinationals and millions of smaller enterprises…

In this material it is possible to see a lot of basic statistics on production, refineries, consumption etc. all the way down to country level, and without doubt the underlying data could reveal even more details. It is also possible to see the CO2-emissions with the same accuracy – In short there are a lot of accurate measurements and key-factors available.

In connection to the release of the latest IPCC report scientists also calculated an accumulated “budget” for how much CO2 we can afford to emit into the atmosphere and still stay within the agreed 2 °C target. Turns out that out of the 1000 GTon budget we have already in 2011 used more than 53%, and with the current high and increasing emission-rate the budget will be depleted within less than 2 – 3 decades [!!].

Chris Lang summarized what the UNFCCC plan to do with these measurements and scientific facts in an article in the redd-monitor:

“Last month The Guardian reported Christiana Figueres, executive director of the UNFCCC, as saying that carbon budgets were a “good scientific exercise” but that they could not be the basis for negotiations. Figueres told The Guardian:

“I don’t think it’s possible. Politically it would be very difficult. I don’t know who would hold the pen [in setting out allocations of future budgets].”

What is this? – we have the measurements, the scientific society has agreed beyond any reasonable doubt, that Climate change is caused by humanity – and the top executive of the highest planetary climate-body we have, calls it an “exercise” and states that it could not be “the basis for negotiations”… weeks before the COP-meeting in Warsaw has even started.

One of the most widely spread and used measurement / key-figure is probably the GDP.

Ever since it was first developed by Simon Kuznets in 1934, and although Kuznets warned strongly against it, it has been used as a measure of welfare. After the Bretton Woods conference in 1944, GDP in fact became the main tool for measuring a country’s economy.
Wikipedia describes GDP like this: Gross domestic product is the market value of all officially recognized final goods and services produced within a country in a given period of time. GDP per capita is often considered an indicator of a country’s standard of living.

In a reality where almost all currencies are “Fiat-currencies” and their value thereby is heavily dependent on how well a country’s economy is developing (GDP), our economic systems have become addicted to infinite growth.

Let’s make a short list of some of the GDP-increasing efforts you can do:

To me it looks as if “anything” that creates revenue and profits is good for the GDP, regardless if the underlying activity increases or actually devastates the standard of living for humans – what kind of “devious” and “money-fixed” measurement for a country’s standard of living is that…?

In fact – repairing and rebuilding after the havoc created by Climate change, will create revenue – does that mean we can forget about prevention of Climate change, since it will create an increase of GDP… which according to current interpretation is equal to increasing standard of living… (Sarcasm)

Maybe this TEDx speech by Canadian photographer Garth Lenz can serve as a reminder that “not everything that counts can be counted” – at least not in the GDP…??

Has politics become just talk, talk, talk – and no action…?

Now that we have a scientifically established CO2-emissions budget, equivalent to what the ecological systems on this planet hopefully can cope with and giving us a reasonable chance of survival, isn’t that a fixed and non-negotiable variable in the equation? 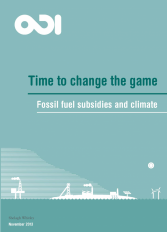 Instead many governments engage in heavy subsidizing of the fossil fuel industry. A recent report compiled by the Overseas Development Institute (ODI) show that subsidies amounted to more than $500,000,000,000 in 2011 and is increasing…?

(Subsidies given to one of the most profitable businesses on this planet – while people are starving, struggling to survive devastating typhoons and while our children are waiting to absorb the associated burden …)

Saving our planet is likely to hurt our current economic system and interfere with our current way of life, but not doing so will definitely DESTROY it…!

Emissions need to peek within this decade if we are to have a reasonable chance staying within the 2°C goal  – that’s within 2600 days… don’t waste time!