Why is Flying out of the Sustainability discussion…

Posted on 22 August, 2013 by Sören In Energy, Environment, Pollution, Sustainability

We live in a Global society where people and products continuously criss-cross the planet, but we seem to constantly exclude, or at least forget to mention, one of the means for this transportation in the sustainability discussion.

…and we are not “really” including it in the discussion…

Is it because Globalization is yet another thing we should “not” talk to much about when we discuss Sustainability, since it is one of the current drivers in our economy or is there some other reason…
Maybe it is just because we think that flying is “fantastic” and that it enables us to see all these fantastic places – well, If we are not more careful, there will be no places to see…

Or is it that “Technological connectivity and price comparison engines have shifted purchasing power to consumers, who have been convinced, by repeated discounting, that cheap travel is now a right – not a privilege.” as Anna Pollock (Conscious Travel) describes it in her excellent recent article “Six reasons why mass tourism is unsustainable” in the Guardian.

I am not sure, but here are some reflections.

At this time of year (summer/vacation) the commercials and media are full of “flight-travel-bargains” enabling people to go further and cheaper than ever with air transport, and it is not only the “low-cost” airlines, it is almost all companies. Come to think of it, it’s not only now; these commercials are “popping up” more or less all the time. 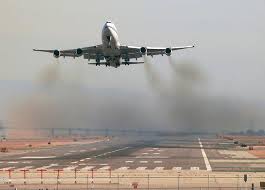 How can it be that one of the “most polluting” of all means of transportation receive subsidies and is also, to great extent, liberated from taxes, “carbon-programmes” and other regulations?
Is this how governments and “the market” try to even-out all barriers for “equal” competitive opportunities…is it maybe part of the strategy that temperature-rise on earth should be limited to max 2 degC…or is it somehow still due to tax-exemption of aircraft fuel according to the provisions of the 1944 Chicago Convention?

Business travel is, in a more and more Globalized world, more extensive than ever, but from UNWTO:s figures approximately 52% of all international travel, in 2012, was for “pleasure”.

To get a picture of how flying compares to other means of transportation, I made a comparison for a journey from Copenhagen (DK) to Genova (IT)
For the calculation I used the great tool on www.ecopassenger.org, which after having studied the methodology, appear to be one of the most accurate and easy-to-use, currently available. (In Europe).

Take a look at their methodology-description – there are numerous factors to include…
(It is also available for, world-wide, freight calculation on www.ecotransit.org) 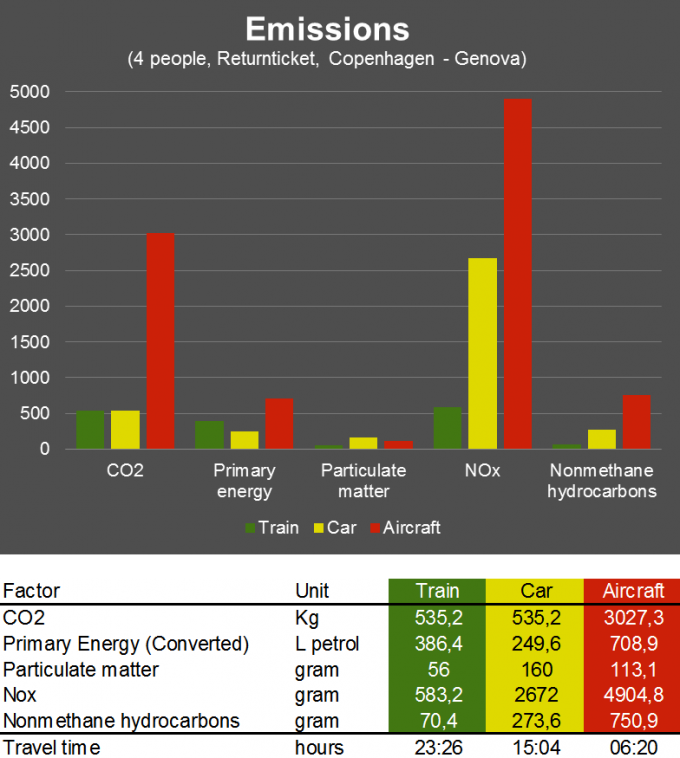 For this specific journey it turned out that the CO2-emissions for train versus car (with 4 passengers) are exactly the same and the consumption of primary energy is actually lower to the cars advantage. The other three indicators are, although very important, on a kind of “smaller scale”.

For ecological and Climate reasons, one transportation-mode is totally “off the charts”.

With almost 6 times the CO2-emissions (including high-altitude GHG-impact), almost double primary energy use and not any impressive figures on the other indicators either, flying is simply a too unsustainable alternative.

It is actually quite incredible that this means of transportation still is heavily subsidized and not included in the carbon-certificate system, thus enabling airlines to compete with extremely low ticket-prices – while at the same time being the most “polluting” one.

Difference in travel-time between train and car is 8.5 h – a good night’s sleep, either at a hotel (car) or in a sleeper (train). For travel-time via aircraft, time for check-in, security etc. needs to be added.

It is not only about the emissions, it’s also about the “habits” it promotes!

The UN World Tourism Organisation UNWTO estimated in their report “Tourism Highlights” that more than one Billion (1,035,000,000) international “tourist-travels” where performed in 2012 and that most travels where by air and for leisure-purposes.
52% of these travels where made via airplane, which equals 538,200,000 airplane-rides. And this is only International travel; we have to add national flights to this as well…
A 5% growth rate adds, at least 27.000.000 airplane-rides – for pleasure – to this number… every year… The UN forecast is that international tourism will almost double in size to 1.8 billion travelers within the next 17 years…
Latest news on the UNWTO homepage show an increase for the 4 first months of 2013 with 12.000.000 travellers compared to 2012.

UNWTO Secretary-General, Taleb Rifai stated: “The 4.3% growth in the number of international tourists crossing borders in the first months of 2013 confirms that tourism is one of the fastest growing sectors of our times…” then used superlatives like “positive in all regions and “star performers”…(?)

Today it is not unusual to hear people say; we flew to Paris over the weekend, with a price-tag of €24.95 one-way, we just couldn’t refuse it…

I’m a little bewildered – Why is the fastest, but most energy consuming and “dirtiest” form of transport quite often also the cheapest – It doesn’t make sense even from a pure capitalistic viewpoint.

And still almost no week passes by without news about some airline having financial problems, that prices are pushed so low that it is hard to get any profitability, pilots are forced to work unreasonable hours and that security-flaws are detected – while we at the same time are flooded with advertisement for even cheaper flights…

Low profitability and fear of jobs being lost is then used as an argument by the airlines to avoid fuel-taxes, carbon-pricing etc.

Let me think out loud here – “A self-inflicted low-pricing should then be a reason to continue to avoid taxes and make it cheaper to pollute our atmosphere…”
– did I get that right…
And because people are “convinced, by repeated discounting, that cheap travel is now a right” – the public opinion should be in their favour…
…but what about the Climate…?

…but maybe – if we fuel the planes with bio-oil from the seed of Jatropha Curcas, from the nuts of the Babassu-tree or Coconut palm-tree and clear an area larger than the size of France (>547,000 sqKm) somewhere in the tropics for the plantation – maybe we could continue…I wonder if we can cut down the rain-forest at the same pace as air-traffic increase though… (Link to previous article)

“As I write, highly civilized human beings are flying overhead, trying to kill me.”

…Can we at least bring it in to the Discussion…