WE are the world… more cooperation needed!

Posted on 9 May, 2013 by Sören In Economy, Environment, Social, Sustainability

If humanity is going to continue a successful life on this planet, we need to embrace a sustainable lifestyle – not only me, not only you, not only someone else – WE!

Even if nobody can have missed the fact that we have only one planet and that our humanity’s existance on it is threatened, numerous statements show incredibly cynical views on this undisputable fact. 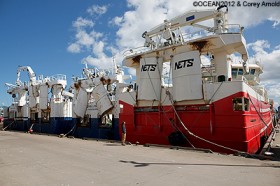 EU – Fishing Industry
Science shows that more than 70 % of fish-populations are fished at or beyond the limit of what is sustainable. There is approximately 50% over-capacity in the fishing industry. Half of all fish caught in the North Sea are thrown back overboard – dead. And still Spanish and French ministers are almost totally reluctant to negotiate a common EU-policy to save and, if still possible, restore fish-populations to a sustainable level, due to the impact it will have on their national fishing-industry. (A fish-free ocean will support NO fishing industry)

Emissions from airplanes
An EU-directive to make airlines pay taxes for their CO2-emissions was opposed by both China and USA and backed by corporations arguing that it would inflict barriers to competition – the directive was later withdrawn. In the meantime low-cost airlines are growing and unsustainable habits are promoted and spread to more and more people.

UN, Conference of the Parties (COP)
Negotiations to introduce world-wide regulations on CO2-emissions have again and again been stalled and postponed mainly for country/business-competitive reasons. This have continued since Earth Summit in Rio 1992 (COP1) to the most recent COP 18 in Qatar. In reality “Nothing” has happened and no binding commitments are in place.

These examples are certainly a little too simplified, but in principle they still serve as examples of lack of commitment and incapability to take bold and powerful action to protect our endangered planet – these are serious times and we need serious people making serious commitments!

What’s wrong – is it Egoism, Selfishness, Nationalism or what?

In an earlier article I did some reflections on Our Social “Perpetuum Mobile” – most likely some of the underlying reasons are to find in these “perpetual” setups.

But there is also something else – the lack of ability to cooperate.

When people come together at a brain-storming, it is very common that each party present their standpoint or setup and then await the others to accept it – then cooperation can start… This “dysfunctional” approach to cooperation have a number of quite normal reasons. Some of them:

Existing Business-setup
The existing business setup is often “proven in battle” and has a proven functionality, revenue and profit. Any attempt to change the setup creates a lot of uncertainty. If the company is listed, the quarterly-economy also put a lot of pressure on short ROI:s.

Existing quality systems etc.
Today many corporations have invested in certification schemes according to ISO 9000, ISO 14000 etc. describing and structuring their “modus-operandi”, often in great detail. Changing these include a lot of work, time and costs.
(Read more in a previous post – Here)

Existing “Company-Ego”.
Successful companies gather a lot of “self-esteem” in what they do and how they do it – changing this takes a lot of willpower. Changing to accommodate what others need also takes a humble and open attitude.

Personal Ego.
Individuals representing a company are often in a situation where “giving in” to someone else’s needs can be regarded as a weakness by his/her colleagues back at the office.
This implicates also that the representative might need to “sell-in” a new or altered business setup to colleagues and management – putting his/her ability and credibility at stake.

Most likely you can think of a number of other reasons and, when it comes to cooperation between countries, the reasons get an even bigger context including things like cultural and religious differences, political systems setup, ethnic- and tradition differences and so on.

Cooperation is the Key… 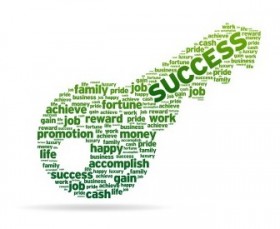 Even with the obstacles mentioned earlier, cooperation is the way forward –

Nobody can create a Sustainable World alone!

When we now need to re-engineer our processes and production to accommodate a sustainable life, it is essential to look at the whole life-cycle of a product or a service. Making incremental sustainable change in some part of the cycle is not likely to result in a Sustainable product or service.
(Also see a previous article on “Incremental Change”)

For this reason it is therefore essential to enhance our capacity to cooperate. A Sustainable, triple bottom line (People, Planet, Profit) setup requires a lot more aspects to be considered and handled throughout the whole production and supply-line, aspects far more difficult to handle than traditional “money-issues”.

Recent events such as the “horse-meat scandal” and the collapsed textile-industry building in Bangladesh show only too obvious that a much closer and far-stretching cooperation throughout the whole production-line is going to be fundamental  to achieve a Sustainable setup.

Cooperation will also, to a larger extent than earlier, be important both “upstream” and “downstream” in the lifecycle of a product or service. An example:
Somewhere in the cycle there could be a process that, by itself, has a small but unavoidable negative environmental effect, an effect that later in the cycle is offset by a considerably positive effect, thus creating an overall positive effect. 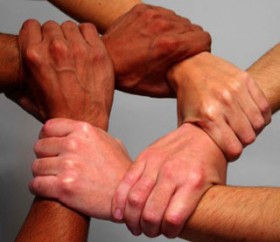 More and deeper cooperation will include all functions in the lifecycle of a product or a service. It will inevitably need a re-engineering of the whole process. This will have deep going effects on the way we do business and will take time to achieve.
It will therefore need closer and more long-lasting business relations between all stakeholders in the lifecycle.

Finally we have a chance to do away with Selfishness, Greed and Egoism, because,

WE are the world!