Posted on 15 January, 2013 by Sören In Environment, Sustainability, Waste

I get annoyed about all the waste we produce. Although I sort the waste from our household in 9 different fractions since many years, the total amount seems to be constant.

Does this mean that we are at the peak of what is possible…? 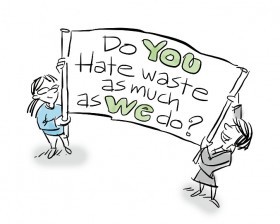 Illustration by Lorne Craig for WeHateToWaste.com;

I have a friend that drives a truck, delivering milk and dairy products to grocery stores. He told me that when he arrives at some stores he often meets employees with shopping carts full of bread that is thrown into a garbage container – explanation was that the best before date had been exceeded. Having seen this a number of times he asked again, because it seemed to always be a specific type of bread in the carts – explanation then was; that specific brand has a set-up where the store, in order to have two high volume popular products on their bread-shelf, had to order a specific pre-set variety from the producers range (some issue about “branding”) regardless if you were able to sell it or not… So, in this case, for every five loafs of bread sold there is one extra pre-destined for the dustbin….? In a world where almost 1 Billion people struggle every day to feed their families.

In the construction industry you can find similar questionable setups and habits. If you look at the amount of plasterboards delivered to a building site and at the same time check how much plasterboard-waste is being removed, it seems as if somewhere between 20-25% of the delivered amount is waste – every 5:th board is just “transferred” through the system. There are of course explanations to this – fine, what bothers me is that very little is changing and it has been like this for quite some time.

Just the other day there was a debate in the newspapers about tealights. The cup itself is made of aluminium-foil but there is a small piece made of steel that holds the candlewick. The manufacturers of tealights wanted consumers to separate these two and throw them in separate dustbins…. Apparently the industry uses some kind of magnet during production and therefore need a magnetic metal. I have one piece of advice for the producers:

“To eliminate the concept of Waste means to design things – products, packaging & systems – from the very beginning on the understanding that Waste does not exist”

Currently, here in Sweden, waste is becoming a commodity – there are so many district-heating companies using waste-incineration as a base in their production systems that there actually is a “shortage” –  we are importing waste from other countries….

The district heating industry is sometime referring to it as “substrate”. I suppose it sounds a bit better than talking about garbage or waste, and it’s a little bit more abstract.

I was once in a meeting where someone, employed by the district-heating industry, proposed to add a new “concept” in a Primary energy equation, a “disposal-factor” adding extra value to the equation if you “help” humanity to get rid of some garbage by burning it…. Isn’t that a little bit like a money-laundry operation, transferring money from a dubious economy to the normal economy? Question is; Does it promote less waste-production?

But there are things going on. Recycling is on the agenda and more packaging is becoming “one-material-only” to at least simplify waste handling for the customer.
Then of course there are companies doing right without thinking so much about it. An office-furniture company based close to where I was born has a business concept that includes transport and assembly in your office. Already in the sixties they used blankets as packaging and they continue to do so even today. The blankets are re-used at least ten times. IKEA is another company that have packaging as a part of the pre-requisite for design.

Communities such as “Sustainable Brands” are focusing on sustainability issues and creating a platform for companies to meet and share knowledge.

Let’s hope that companies are not only “streamlining” or “Greening” existing products but also re-starting the design process in the way William McDonough expressed it.