Sustainability is NOT about making sacrifices!

Posted on 8 July, 2013 by Sören In Change, General, Social, Sustainability

Sometimes when I give speeches or hold lectures on the subject of Sustainability, people ask me “Do we really have to give up all this…” referring to our current way of life.

Let me therefore start this article and reflection on life, with a short anecdote;

There was this guy who, when he got a new job, realized that since his new office was in the vicinity of the city bus-terminal, it perhaps would be smart, not to use his car to commute. His friends then advised him; think of the freedom you have with your car, you can do errands on your way home,

it’s convenient when you go for meetings, what do you think people in the neighbourhood would say if you all of a sudden turn up at the bus-stop every day, what about your social status…
The guy wasn’t convinced by the arguments, so he decided to try – after two weeks he realized that he hadn’t given up or sacrificed anything. He had gained some new friends on his bus-rides making the ride a social adventure every day, he never had to look for parking, he used the travel time to think, listen to music, reading and conversations with his new-found friends instead of concentrating on queuing with his car, after meetings with colleagues he could easily make a quick stop at the local pub without planning what to do with his car, and so on…

It is about making choices

It is fantastic how quick we are to defend our choices, they don’t even need to be good choices, as long as they are ours – we defend them, more or less like a “reflex”!

Come to think of it – they don’t even need to be our choices, they can be choices made by a community, a company, a country, a political party or any other group or person that we feel associated with – and in that case we can even defend choices that we might not be especially fond of, just because it is a “part of the package”…

There are, most certainly, a series of psychological and behavioural explanations to this but, at this point, let us conclude that this is how many of us act.

This is also why your personal stand-point is so important. Many people blame our society for the dilemma we are facing, many even say that if you can get the society to change I will consider to change also, and to some extent they are right – but never forget, our society is based on people like you and me, it is not some other “entity” that we can alienate ourselves from – it’s us! – And it’s only us that can change it…

When talking about change it is very easy to stir up people’s emotion – which is only natural. Most people are not that eager to change, especially if someone else is inflicting the change upon them. Now that we are entering the Antropocene Era, we need to change from Industrialism to… yeah, what should we call it?

Some people say it is the Service- or Information era; some call it post-Industrialism, I’d hope we could call it the Humanistic era, an era where we re-instate the importance of being a Human being.

“All that is valuable in human society depends upon the opportunity for development accorded the individual.” 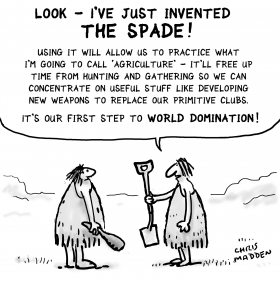 What happened when we changed from the Stone Age to the Bronze Age?

Where people sitting around the camp fires discussing whether they now had acquired enough “Bronze-stuff” to call themselves “Bronze Age people”?
Did someone read the latest issue of “Metal Journal” and purchased something via mail-order?
Was it an eligible upgrade if you had bought a flint-stone axe at an earlier stage, or was it that they simply run out of stone….?

…These changes just keep on coming, don’t they…

This time we are, again, leaving something good – going for something even better.
More and more people are questioning the current, extremely “materialistic” lifestyle, where the grass is always greener on the other side. If you buy this or that you will be so much luckier, good looking, enviable, attractive – the “possible” superlatives are endless.

And we work harder and harder to earn more money, to buy more stuff – our homes and wardrobes are “flooded” – but are we happy?

No – We are not! A number of studies show that although we have plentiful of materialistic belongings more people are unhappy than ever, suicide-rates are higher than ever, stress-related illnesses are increasing, crime-rates are soaring and our society is showing many signs of fatigue. 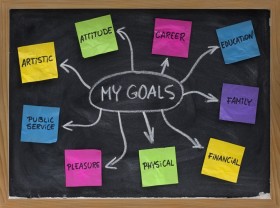 Somehow Industrialism and our fixation on “stuff” have created a goal-fixated culture.
We have to have long-term goals, short-term-goals, mid-term goals and, and….

Once you have reached a goal there is a brief moment of euphoria and then it’s time to set the next goal… In this kind of culture, focus is on these brief happy moments, while everything in-between becomes “a struggle” to reach the next one – in short, the largest portion of your time becomes “a struggle” – Is this the intention with life?

In business-life it is even more exaggerated. Listed companies are often working with monthly or quarterly economic goals. These goals are set to please the shareholders, so that they can get a good return on their investment, shareholders that in many cases not even work in the company. Company directors argue, however, that their responsibility is to maximise the value that they deliver for their shareholders – Is this the truth?

What about our human society – Is it always second to profits…should it be this way…?

It is very unusual that you see a goal focusing on what a company is actually providing to our society. Sometimes there are some efforts, but only after economical goals are met…

Sometimes I am intrigued about the way we always seem to reward “more”.

Just the other day I read a “home-magazine” and came across an article about a very fancy villa by the sea. In one section it said that the 370 sqm (3982 sqf) where designed in a “minimalistic” style… With only two people living in the house, how can 370 sqm ever be minimalistic? (I know about the genre/style “minimalism”, but anyway) 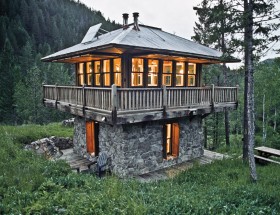 Very seldom you find articles about people that have decided to live in a very small house or apartment, optimizing their costs and giving them greater opportunity to decide the lowest amount of hours they have to work, thereby increasing their possibilities to have leisure-time, to execute their hobby or in other ways enhancing their personal development.

I suppose that type of article doesn’t support the consumerist mantra – Buy, Buy, Buy – and is therefore discarded by the magazines (Link to article about “Perpetuum Mobile”)

What about you – Have you ever thought of the idea of minimizing your costs and your “must’s” thereby enabling you to work as little as possible?

A real-life story:
Last time I visited a fast-food restaurant I ordered a hamburger and a fruit-juice, the cashier immediately asked me if I didn’t want the complete meal which included also french-fries at only 20 cents extra – and was a bit astonished when I answered No to the “great” deal…

(For only 20 cents I avoided 340 kcal that would have generated an extra 3.5 km on the jogging-track later that evening…and it was raining)

Almost every measure has a counter measure e.g. The Glass is half full versus The Glass is half empty. This is a very useful metaphor, and it’s often the same when it comes to choices in life, so take a “Step Back and Think” before you make the choice.

I started this, rather unstructured (it’s vacation-time), article with an anecdote, so let me close with another one;

At one time in the US, I needed a rental car to get me to a meeting. I had ordered a small car, since it was only me and perhaps one passenger. At the airport I was issued a Dodge Durango. Knowing less I went to the parking lot and found a huge 4×4 SUV-type of vehicle. I immediately went back and asked for a replacement, but this was the one they had reserved, and there was no replacement available, at that time…

Later that evening, when I had hidden the monstrous vehicle behind the hotel, I asked a couple of guy’s in the bar, “Who needs such a vehicle?” – They looked at each other and answered; “You don’t get it do you, it’s not because you need it, it’s because you can [afford it]…”

(…poor choice, this philosophy of life didn’t trigger much sympathy with me…)

Remember, it is NOT a sacrifice, it’s a choice – Choose wisely!