Money Talks… but what are they saying?

Posted on 29 June, 2014 by Sören In Economy, Social, Sustainability

“Money Talks” – is probably one of the most worn-out expressions in the phrase book.
Quite often the phrase is used by money-focused people to dismiss or terminate any discussion, especially discussions arguing that there are other values to life than economic wealth.

Another typical use is when rich people want to show-off their wealth, pointing out that “anything can be bought”…

But – a Phrase is one thing, what it really communicates is something else, isn’t it?

Let’s take a look at what they are really saying… 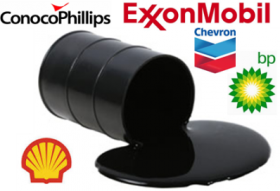 And Exxon is not alone – BP, which claimed the carbon bubble theory overestimates the potential risk, and Shell have recently communicated similar messages to their shareholders.

As Natasha Lamb and Bob Litterman wrote in an article published in GreenBiz.com:

“…The companies then argue that this low-carbon path is far too expensive to be feasible, and that we won’t, in fact, spend such amounts. And because society won’t bear these costs, a low-carbon future that strands carbon assets isn’t a realistic possibility. ‘Q.E.D.‘ Their ultimate advice: Shoot for 550 or 650 ppm and hope for the best. And at those levels, we can burn all our hydrocarbons. Put differently: We’re going to ignore this risk. It’s safe for investors to do likewise…”

Instead; the fact that these comments are at all occurring, clearly shows that the fossil-fuel industry has acknowledged that a bursting “Carbon-bubble” is a very, very imminent risk.

… or as one economist put it “once the finance world realize that an asset will be less valuable tomorrow or next week, it will immediately lose its value – nobody will pay a high prize today for something knowing that it will lose value tomorrow” 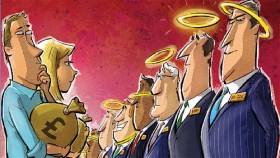 A couple of weeks back I listened to the Sustainability Manager from one of Sweden’s largest insurance companies, Skandia, describing some of their efforts within Social philanthropy, which of course is admirable, but then I checked a little bit into their money- and pension fund business…

Turns out that they have invested billions of SEK into the fossil fuel industry – out of 33 funds 24 had investments in the “Energy” category among their top-ten major investments, with Exxon, BP and Shell among the top – and that´s only the “direct investments” not accounting for investments through other funds.

And they are not alone, I also checked another Swedish insurance company – Folksam, a company whose rating-list on other companies Corporate Responsibility efforts is often referred to – also in their portfolio significant holdings in corporations like Shell and Halliburton can be found. Even more ostentatious is that they strongly promote a number of funds using the prefix “Ethical” but still investing huge amounts in the fossil fuel industry and corporations like Exxon and BHP Billiton.

…talk about hypocrisy – rating other corporation’s efforts within CSR, while applying very questionable business Ethics in their own business...

This made me wonder, so I checked further into other funds, especially focusing on funds “branded” as Ethical, Environmental, Social or Sustainable, both Swedish and International.

My small, unscientific “investigation” showed that although Fund owners state they screen investments to safeguard that they meet their “high standards” avoiding things like “tobacco, weapons, pornography” etc – they don’t hesitate at all to put huge amounts of their money in the fossil-fuel industry, an industry firmly determined to harvest their profits regardless of the future of our planet… dismissing all available scientific facts…

…I don’t get it – what is ethical about investing in the destruction of our planet and humanity?
Has the “money-industry” become so rogue, that they believe they are accountable to none, that they have some kind of “Veto” on whether humanity should continue to live and prosper – or not…

And while we are talking about Ethics, let’s take a brief look at an industry where the word seems to have been erased from the “business dictionary” altogether… 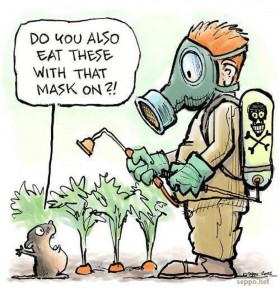 “…what about Testing – how do you test effects from modified organisms that have never existed before… and where effects may linger for decades and generations? What about the “Precautionary Principle” – isn’t “GMO” a field where it should be an absolute prerequisite? Judging from how this is handled today, apparently NOT – “fiddling around” with what is probably the most important basic “building-bricks” to ALL life on our planet seems to be almost “fair game” to any corporation…”

On May 24, millions of people around the world participated in the March against Monsanto, calling for the permanent boycott of genetically engineered foods and other harmful agro-chemicals. Marches occurred on six continents, in 52 countries, with events in more than 400 cities, including 47 U.S. states…

815 scientists and experts on biology and ecology from 82 countries have signed an open letter submitted to many governments and international forums with serious concerns regarding GMOs coupled with a call for an immediate 5-year suspension of GMO crops in order to conduct “a comprehensive public enquiry of agriculture and food security for all.”

…and the reaction in the “money-business” – the Monsanto share-price has increased with 75% over the last three years…!?

…I don’t get it – are investors and banks really so indifferent to where they invest their money, that they don’t care if “rogue” corporations such as Monsanto are fiddling with the basics of our very existence, as long as they get their ROI?

Last week I heard an interview with a couple of bank executives. On several occasions they used the word “products” about their various schemes and investment alternatives. 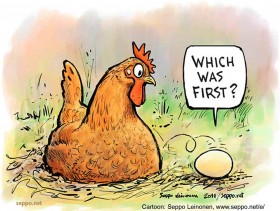 Being a layman in these matters, it made me wonder – Do they actually think that they produce something, or is this the typical “Chicken or the Egg” thing – where they have totally lost track on what comes first…

The main objective for a corporation is, and will most certainly always be, to make a product or deliver a service to its customers, without this objective there is no genuine justification for its existence.

And as Henry Ford once said:

Somehow banks and investors seem to have repressed this basic fact and have replaced “the real benefit to society” with numbers, key-figures and incessant financial reports – regarding it as a mere “sub-calculation formula” replaceable with any other “formula” – anonymizing the underlying business.

Promoting this, so called “product”, to clients easily give the impression that it is the bank’s own “production-process” (placement strategies etc.) that generates the “Return”, not the underlying businesses – putting a “thick” layer of anonymity between what is the real “value-creator” and the client.

…and as if this is not complicated enough, the bank could invest their clients money in another banks “production-process” adding further layers of anonymity between the client and the real underlying business… they could even add an anonymous company in the chain, effectively removing all connections…

This way of cutting relations between investors and the real value-creation, makes it very complicated for anybody to track or decide where they should place their money.
On the other hand it puts a lot of responsibility on the Banks and Investment companies to act as responsible members in our society on our behalf – but as referred to in an earlier article (Link) “Only ‘people’ have responsibilities…’Business’ as a whole cannot be said to have responsibilities, even in this vague sense’…”

…let me try to wrap my head around this – if I trust my savings to the “production-process” of a Bank or an Investment company and they chose to invest it in a corporation dealing with i.e. fossil fuels, not only will it be difficult for me to really find out where my money is placed, I am also supposed to trust a “non-responsible” business to invest them “responsibly” on my behalf – sounds like “a load of crap” doesn’t it …

…what is it REALLY that money, or rather the “Money-industry” are saying…?

When looking at the examples above I don’t know what is worse, the offender or the ones legitimizing foul behaviour, even supporting it with investments, inaction and anonymity.

How can it be that executives and corporations demonstrating such apparent disinterest and disdain for the wellbeing and survival of our society, if it interferes with their business plans and quest for profits, are still treated with “respect” by our society, even being “idolized” and referred to as “successful” – are Ethics and Moral so incidental even in this situation where humanity’s existence is at stake… What is “succesful” about supporting the destruction of Humanity’s chances of survival…?

“The greatest tragedy is not the brutality of the evil people, but rather the silence of the good people”