Less Unsustainable is NOT EQUAL to more Sustainable!

Posted on 18 April, 2013 by Sören In Change, General, Sustainability 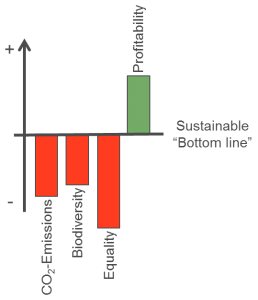 We need to set the Math right!
Quite often there are commercial messages and communication from corporations, stating different variations of “being more sustainable” – On a packaging using less plastic, on a car with lower than average CO2-emissions, on a detergent with low concentration of chemicals etc.

This way of using a relative context, pretending that it is an absolute context, is not only strongly misleading and deceptive, it also postpones real change.

Is a corporation that improves its business from a large economic loss to a small economic loss – “more” profitable? No! – It is not, it is still not profitable!
Why is an increase in corporations CO2-emissions often handled with a shrug while a poor economic performance brings extensive action programs? Why is it OK to use a relative context when it comes to People and Planet, but not for Profits?

Reality is that – It is NOT OK!

If we are serious about a continued civilization on this planet, we need serious action, not a competition on who is “less bad”. We need individuals, corporations and governments to face the huge challenge and to focus on being Good!

Look at the small diagram above, the “best” measureable value a negative “thing” can have is zero. Take CO2-emissions – if you reduce your emissions it’s of course a good thing by itself and it brings you closer to the “bottom line”, but it doesn’t make you more sustainable. To become more sustainable you first have to pass zero emissions, which in reality means that you have to start some kind of “Carbon Capture-program” or “offset-operation”.

It is of course very difficult to exactly determine the zero-level.
Human life, as we know it, will probably not be possible on this planet without some level of CO2-emissions. We are also living in a very fragmented society where the lifecycle of a product or a service often is assigned to many stakeholders, each a specialist in their field. This make it hard for a single stakeholder to get an overview and to assess their part and responsibility for the total environmental impact.

On top of this there are a number of boundaries, other than CO2-emissions, that we need to consider simultaneously, boundaries such as Biodiversity, Acidification of our oceans, Water scarcity and Social equality. To get a good overall view on our planetary boundaries, I recommend reading the excellent book “The Human Quest” by Johan Rockström and Mattias Klum. (Also available in Swedish and as E-book)

The longer we continue to lie to ourselves, pretending that we are “more sustainable”, when we in reality are not, the more difficult real change will be.

If we pretend that cars with a slightly lower CO2-emission are “more sustainable”, millions of people will buy these cars in “good fate”, this leads to traffic-congestions, need for more and wider roads, city-planning based on car-travel, and so on… 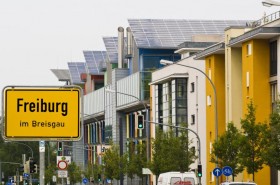 Recently I visited Freiburg in Germany, a city with strong focus on creating a more sustainable society.
When planning for a new extension of the city, they first of all provided an extension of the tramway. By doing so, they clearly stated from the very beginning that this was a part of the city where owning a car was not necessary. They also planned for local schools and promoted a variety of stores to establish in the area. The result is a very “human-friendly” city with less than half the car-density compared to other parts of the city.

This is a good example on how focusing on real change from the beginning creates the conditions for the whole society to change.

The next generations from whom we “borrow the planet” are eagerly waiting for us to change – in fact, They depend on it!