Posted on 18 February, 2016 by Sören In CSR, Economy, General, Sustainability 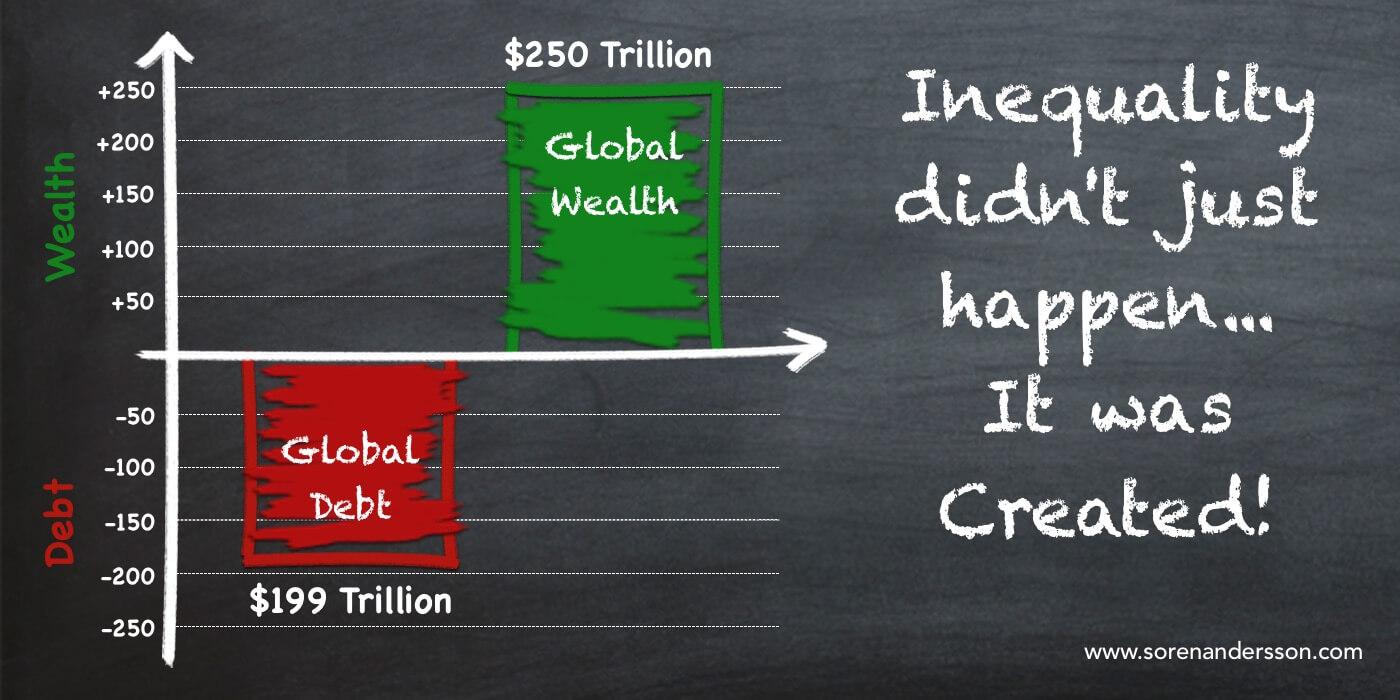 Since the Great Recession in 2008, Global Debt has increased by $57 trillion, outpacing world GDP growth, and is with $199 Trillion now at approx. 270% as a share of GDP.
(Source: McKinsey & Co, theGuardian)

Global Wealth reached 250 trillion US dollars in 2015, slightly less than a year earlier, due to adverse exchange rate movements. Wealth is now at approx. 340% as a share of GDP
(Source: Credit Suisse)

So – if we subtract the Global Debt from the Global Wealth, there will still be $51 trillion left, corresponding to approx. 69% as a share of world GDP. Distributed equally on our current population of approx. 7,400,000,000 this corresponds to a wealth of $6,891 (€6,323) per every single human being on this planet…

This would place every single individual at a wealth-level, more than double of what today is required to be part of the “wealthiest half” of the world’s adult population – > $3,210 once debts have been subtracted – according to Credit Suisse Global Wealth in 2015 and the “Global Wealth Report 2015“.

Well – most likely this won’t happen any day soon, instead our economic systems are currently designed to continuously distribute and concentrate wealth to the top 1% – creating more and more economic inequality as we speak…

Economic Inequality – The “mother” of all Ponzi Schemes…?

Ponzi Scheme… where the operator, an individual or organization, pays returns to its investors from new capital paid to the operators by new investors, rather than from profit earned by the operator… 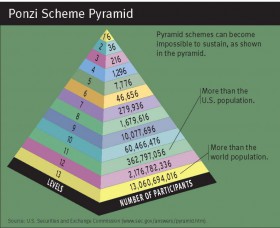 Debt is currently increasing faster than the GDP, while at the same time corporations report significant profits and pay high returns to shareholders – could this be an indication that these returns might originate from new capital (debt) and “inflated values” rather than from earned real profits.

This current version of extremely extractive economy will eventually reach a point when the “base levels” of the pyramid, due to debt burden and stagnating wages, no longer can afford to “feed” the top layers, with an overwhelming risk of collapse…

Corporations and the wealthy in our society are continuously pursuing every opportunity to avoid paying taxes. (taxes meant to support our society) Multinational corporations are continously outsourcing production etc. to low-cost, low-tax and minimum regulation locations in a “low-cost” spiral pushing wages to, and below, minimum levels globally.
This inevitably leads to increased lending; by countries (due to lack of tax revenue) to afford reforms and keep reasonable services in society;  by “ordinary” people (due to stagnating wage-levels) to afford a “western” lifestyle…

According to a study by Oxfam International, in 2010 the top 388 richest people owned as much wealth as the poorest half of the world’s population—a whopping 3.6 billion people. By 2014, this number was down to 85 people and by 2015, 62 people. Oxfam claims that, if this trend continues, by the end of 2016 the top 1 percent will own more wealth than everyone else in the world combined. At the same time, according to Oxfam, the extremely wealthy are also extremely efficient in dodging taxes, now hiding an estimated $7.6 trillion in offshore tax-havens.

Why is this rapidly increasing concentration at the top and increasing malaise everywhere else happening? Most common explanation for today’s situation is: the rise of technology which makes many jobs obsolete; and increasing globalization which puts incredible pressures on companies to lower wages and outsource jobs to compete against low-wage workers around the world.
…and the already fierce push for globalization is intensifying, see previous article – Here

The economic inequality didn’t just happen – it was created – primarily through an economic belief that, intentionally or not, serves to concentrate wealth at the top by extracting it from everywhere else. 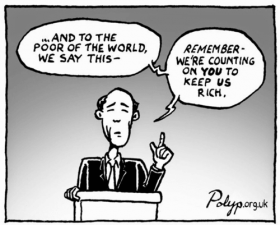 It is easily recognized by its signature ideas: deregulation; privatization; cut taxes on the rich; roll back environmental protections; eliminate unions; increase globalization; and impose austerity on the public.

The theories from the Chicago School and F. A. Hayek, Milton Friedman et al, gained interest in the 1960s and have influenced government policies in many countries ever since, especially during the 1980s. Friedman was an advisor to both Republican U.S. President Ronald Reagan and Conservative British Prime Minister Margaret Thatcher.
His political philosophy praised enthusiastically the “virtues” of a free market economic system with minimal intervention. Read more about a Free market at “ANY” price – Here

And then we add a large chunk of “Crony Capitalism”…

When you read about corruption, the map of perceived corruption (below) from Transparency International is always a good place to start. It gives a good overview of corruption levels around the world. But one thing is missing – The legal Corruption.

Many countries and organizations allow for “stakeholders” to economically support or in other ways sponsor their politics and related activities in various legal ways [??]
Such setups do not only distort the Democratic basics of “One person = One vote”, it also creates a largely biased situation in favor of the economically strong – and thereby systematically increases Inequality.

Politicians and other persons in power are today continuously under pressure by lobbyists with vested interests and agendas to influence the process in favor of their “partners”. In this process, money is of extreme importance – the more money – the more lobbyists, the more lawyers, the more “biased” research, the more PR, the more media-time, the more lavish events etc. can be launched. 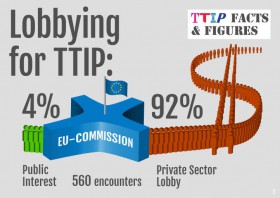 “Between January 2012 and February 2014, as TTIP discussions began, the Commission’s trade department (DG Trade) had 597 behind-closed-door meetings with lobbyists to discuss the negotiations, according to internal Commission files obtained by research group Corporate Europe Observatory (CEO). There were 528 meetings (88 %) with business lobbyists while only 53 (9 %) were with groups such as trade unions and NGOs. The remainder (16) were with other parties such as public institutions and academics.”

To even suggest that politicians not are influenced by this flood of lobbying, that they will not be “flattered” by so much attention or that they are “immune” to bribery and “special treatment”, is naive.
If you then ad the fact that most politicians already are part of “the wealthy sector” it includes all the signature features of a Crony Capitalism…

The U.S. Political system – the archetype for Legal Cronyism?!

In a recent article in Politico is described how the 100 biggest donors [Billionaires] so far have spent $195 million trying to influence the 2016 U.S. presidential election – more than the $155 million spent by the 2 million smallest donors combined – and then the notorious Koch brothers were nowhere on Politico’s list. Although they reportedly plan to spend nearly $900 million on the presidential race — more than either the Republican or Democratic parties 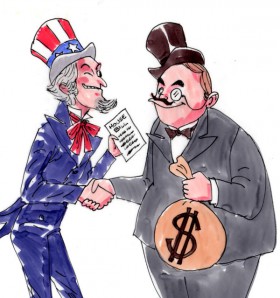 …amazing – a couple of extremely wealthy reactionist brothers who according to a recent article: “…signaled last week that it is expanding its financial and organizational support for a coalition of anti-government activists and militants…” are according to U.S. law, legally allowed to economically support [Buy] a presidential candidate of their liking…

If you haven’t watched it before, take a look at the TED-Talk by Lawrence Lessig on “Lesterland” – apparently “One man = One vote” is only valid in the U.S. once the wealthy have had their saying…

…isn’t it ridiculous to name a country, where only wealthy people supported by other wealthy people can become a president, as “democratic”… when it in reality is a Plutocracy?

The resemblance to another large country, with an allegedly radically different [communist] political system, where a small group of politicians together with a group of wealthy people (Oligarchs) are in control, while the rest of the citizens have no or very little influence and wealth, is appalling…

The really ugly truth about political Cronyism is that it quickly becomes a self-generating “Perpetuum Mobile”, privileges are easy to get used to – The only people with authority to change the system are the people currently “in power”, enjoying their privileges…

If you aren’t among the > 4,1 million people who have already seen it, spend some time watching this documentary about our flawed economic model – its time well spent!

…didn’t you believe it was this bad – remember that the film was launched in 2013 – things have actually become much, much worse…

Equality can be “interpreted” in many ways. Quite often this is cause for discussions and aggravation. It is also often integrated together with other political statements and visions, which sometimes blur things up.

“…policies that stress fairness as uniform distribution tend to succeed because they appear to entitle everyone; and, thus, reinforce most peoples dominant construction of fairness as equality. Conversely, policies aiming to achieve equity face recurring challenges as unfair…”

It is not that simple, circumstances vary a lot, as do the “placement” of the threshold and therefore “Equality” through uniform distribution only works if ALL other circumstances are the same.

There is probably no such thing as absolute equality, it is probably not even a “State” we should strive for. A balance between “Sameness” and “Fairness” while eliminating the extremes is more likely the Role Model we should aim for.

To read more about how a sustainable Role Model could be obtained and to take a look at Prof. Emeritus, Richard Wilkinsons TED-speech, explaining the hard data on economic inequality and how it really effects on health, lifespan and even such basic values as trust. – follow this LINK to a previous post.

It is high time that we replace the greedy and flawed ideas of Neoliberalism with something else, or to use a quote by Milton Friedman:

The hypothesis of unbridled, unregulated capitalism and an unconstrained Free Market – to create or even support a good society for all – failed the Test!