“Do not impose on others what you yourself do not desire!”

Posted on 8 February, 2013 by Sören In Change, Sustainability

This quote by Confucius has been used in many, many variations and in endless situations in the past – let’s bring it into the Anthropocene.

The latest version of the quote that I come to think of, goes like this – “…meets the needs of the present without compromising the ability of future generations to meet their own needs….!”

Could it be so, that the Brundtland commission in 1987 actually “borrowed” Confucius old quote and modernized it (?), or can we include Confucius quote in what is normally called “common sense” and that they both, only separated by 2,500 years, used it?

It is actually quite fantastic how common sense actually makes sense and comes back again and again when referring to how we – the people – want to and should be treated. 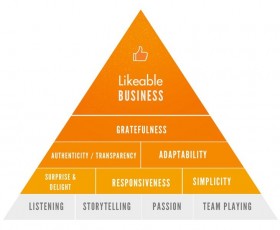 Just the other day I read an excellent book by the New York Times bestselling author Dave Kerpen, “Likeable Business”. In his book based on interviews with dozens of successful business leaders he makes a list of how to become a Likeable Business. After a list of 11 really useful rules, illustrated in the pyramid to the right, he summarizes with the final Golden Rule:

“Above all else, treat others as you’d like to be treated”

Why is it so hard?

Why do we treat others in a way that we ourselves don’t want to be treated?

It is quite easy to sit at home in front of the television set and condemn others that go to war and kill each other based on which faith they belong to – I have browsed around and actually most faiths have a version of Confucius quote among their “rules of behavior”
It is equally easy to condemn a dictator, some corrupt leader or unfair regimes for treating “the people” badly while treating themselves with a life of abundance.

It is, however, a bit harder to question the way we, the rich part of our society, live a life in exuberance and abundance, while at the same time  stretching the boundaries of the planets resources and biodiversity way past the sustainable level, putting the whole of mankind at great jeopardy!

It is also incredible that so much of our business life includes “leadership” and business plans that, if executed, will push the world beyond the “borders” in the eternal strive for infinite growth. And even when overwhelming evidence that the impact of Climate Change happens right here, right now – the pursuit for economic wealth seems totally reckless.
Any effort to limit our “way of life” is met with high-pitched voices and all kinds of reactions – I even read somewhere that some state passed a law which bans “Sea-level rise” as a reaction to the ongoing Climate Change….unbelievable and actually rather pathetic!!

Being an optimist and a “possibilist”, I am confident that we – the people – will face the challenges we are up for and that we will come out “on the other side” as a much better civilization.

Let us use the latest 2,500 years of wisdom, known as “common sense” and start the journey to a better place, and let’s START NOW!

PS: By the way, the other 11 rules in Dave Kerpen’s book are also very useful when you start the “journey” and if you want to build a Likeable Business!