Being Passive or Neutral is not an option…

Posted on 11 December, 2013 by Sören In Change, Climate, General

Emissions, dominantly caused by industrialism, have so far increased our planets average temperature with +0.8 °C. If we shut down CO2-emissions totally, right now, the average temperature will continue to rise to approximately +1.6 °C due to the systematic “delay” in our planetary systems – this is scientifically proved – and widely known.

But still sometimes when I read articles and op-eds, watch the news, listen to political debate or reports it seems as if some people, politicians and corporations think there is a choice, a choice not to address Climate change – to remain passive or neutral about it…

So what ARE our options?
A rough summary on some approaches, attitudes and future “results”… 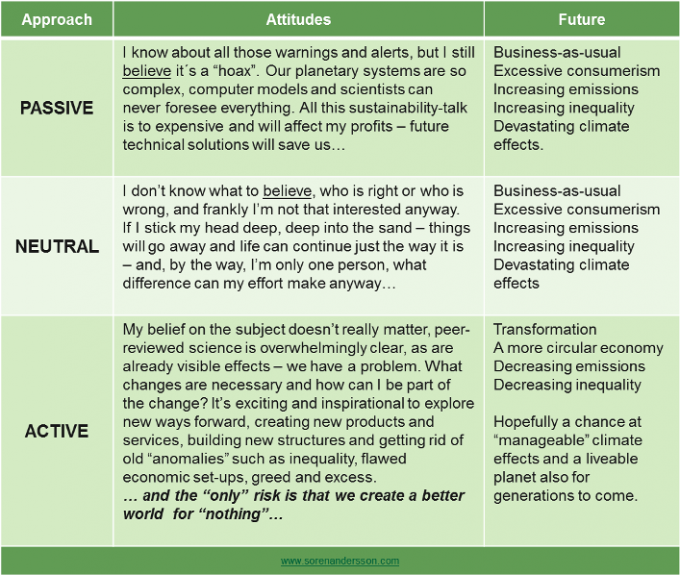 This is of course an extreme simplification, but anyway… What’s your opinion – can we once and for all stop pretending that there is a choice and get on with the change…

Brinkmanship is not the way forward

The current internationally pursued strategy where everybody is waiting for somebody else to make the first move while the threat and effects from Climate change are rapidly increasing (Brinkmanship) is a sure road to catastrophe – we are simply not capable at taking in the scope of the risks we are facing, and therefore not capable to assess when it’s time to “act” to avoid disaster.

Take a quick look at this short clip where physics professor Al Bartlett demonstrates the effects of “Steady Growth” (1.55 min) – “at what time are we now in our race for infinite Growth…”

And while countries are “squabbling”; emissions, consumerism, air-travel, car-sales, water-depletion, extinction of species, de-forestation, pollution and desertification continue to rise at an alarming rate. If we to this add feedback-loops and tipping-points and probably a number of other interconnections still unaccounted for…[!] 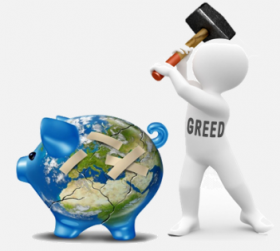 In the wake of lacking internationally binding climate agreements, within our planetary boundaries, corporations are pushing “business-as-usual” exploring every opportunity to increase Profits, often with very little concern about People and Planet.
(Link to previous article about lacking corporate efforts on Sustainability)

Isn’t it amazing that when it comes to trade-agreements, regardless if it is a Trans-Pacific Partnership (TPP) or a Transatlantic Trade and Investment Partnership (TTIP) no effort is spared to move forward, countries are even negotiating to allow corporations the right to sue governments for lost profit, in secret, autonomous companies tribunals[?] – But in the search for global agreements to prevent Climate change and to mitigate the effects from it, which science have proved is essential to our continued existence as a civilization on this planet – silence and unwillingness to accommodate any changes are the prevailing tactics…

There are about 242 countries on this planet (Wikipedia) and approximately 71,000 multinational corporations. 51 of the 100 largest economies in the world are corporations. The Top 500 multinational corporations account for nearly 70 percent of the worldwide trade; this percentage has steadily increased over the past twenty years and continues to do so.
(More interesting info and trade statistics available on the WTO-site – Link)

If any of the 242 country-leaders or 71,000 corporate-executives, believe that he/she who can endure this reversed “chicken game” the longest is going to win – I would be more than interested to know; What do they expect to win – “There is no life on a dead planet”

“There are times when a leader must move out ahead of the flock, go off in a new direction, confident that he is leading his people the right way.”

When I followed the Nelson Mandela Memorial broadcast from Soweto yesterday, one thing struck me – here is the largest concentration of world leaders in one place honouring one of the greatest leaders of our time, an admired leader who’s ability to show empathy, humility and forgiveness was truly amazing.

Are these “leaders” the same people “squabbling” about Climate change, refusing to back down even an inch in favour for our survival on this planet, the leaders that rather than “moving ahead of the flock” instead stay put, waiting for others to make the first move… focusing on maintaining “Status-Quo” and economic competitveness while our Planet and huge numbers of People are suffering…

Innovators and Early adopters will be the winners!

Often it is argued that innovators and early adopters are the ones that “pay a premium” to be first, that risk the chance of doing wrong, that struggle with “bugs” and poor performance…

Well – this time there is no blueprint, there is no “business-as-usual” – we are entering uncharted territories hence you will not be benchmarked according any existing “role-model”, instead the first ones to walk will create a path for others to follow. The benefit of being first is that you get to “set the agenda” or as Winston Churchill once stated:

People, corporations and countries embracing this challenge and acting on it are already getting a lot of positive attention – just look at the “Energivände” in Germany and the almost viral spread of the TED-clip from IKEA:s CSO, Steve Howard (Link to previous article).

What’s your opinion; Do you think young people entering business life, people forming families, people raising out of poverty, customers, voters etc. are going to award and be more loyal to people, corporations and countries that are aiming for and investing in a Sustainable future, or are they instead opting for a “Passive” or “Neutral” approach?

Why should we award a flawed “Status Quo”?

Findings in recent reports from Carbon Disclosure Project (CDP) and United Nations Global Compact (Link to previous article) show that the most wide-spread corporate approach to a sustainable future still seems to be:

“What is the “minimum effort” I can get away with…”

… investment-banks spending lots of effort measuring how much they have reduced emission from their company cars but not even mentioning where they invest their money, major coffee-chains serving fair-trade coffee in recyclable cups while at the same time running complex tax-evasion schemes, multinational retail corporations and fast-food chains paying their workers so low wages that they are reliant on publicly funded social-security systems to live a decent life, and of course these corporations also run complex tax-evasion schemes…

Are these the same corporations that our elected politicians and leaders spend so much time to help, negotiating for even more favourable trade-agreements, even allowing them to sue governments?

Have political leaders totally mixed up “socioeconomics” with “corporate economy”?

To my knowledge no country allow corporate entities to vote at elections – in most cases countries have a representative democracy – for the people by the people. – it is time to make full use of this system. 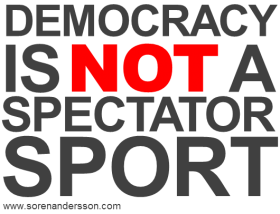 Democracy is NOT a spectator sport!

…being passive or neutral is not an option – we are running out of time!

PS:
In some countries there might be a need to get out of the “Lesterland-approach” in order to get democracy to work the way it was intended. Watch Lawrence Lessigs TED-Talk “Lesterland” in this previous article. (Link)