During the last weeks in the aftermath from the COP19 in Warsaw I have read about countries refusing to send ministers to the meeting and instead sending people apparently wearing T-shirts and gorging on snacks throughout the critical negotiations, a host country dismissing their appointed environmental minister during the meeting [to accelerate shale-gas operations], how corporate lobbyists have been given exclusive access to the meeting process, organizers allowing fossil-fuel related business to sponsor and “use” the meeting as some kind of greenwash, countries starting of the meeting by stepping down from promises already made, countries trying all kinds of “tricks” to delay and procrastinate urgent matters, UNFCCC leaders attending and giving key-notes at the parallel pro-carbon events and, and …

I have also read about how 132 developing countries exited the Warsaw conference after rich nations refuse to discuss climate change recompense and later how a majority of the NGO’s, around 800 people from organisations including Greenpeace, WWF, Oxfam, 350.org, Friends of the Earth, the Confederation, ActionAid and many more, handed back their registration badges to the UN and left Poland’s national stadium, where the talks were being held. Read more: Link to Article in the Guardian

And I have watched Yeb Saño, commissioner for the Philippines climate change commission and head of the Philippines delegation, making a plea of action (Link) on behalf of his country, recently devastated by the typhoon Haiyan, and millions of poor and destitute people around the planet.

A new climate agreement, or yet another empty promise?

Countries have agreed that Paris in 2015 is the time and place to finally sign an international treaty requiring all nations to begin reducing carbon emissions by 2020, supplanting the Kyoto Protocol, adopted in 1997 at the COP3. The Kyoto protocol has been signed by 183 countries (Feb, 2009) but very few are on track to reach their goals and it doesn’t cover the world’s largest polluters, China and the US. 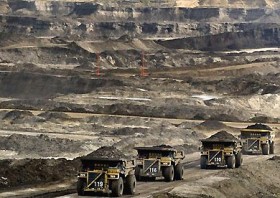 Already in December 13, 2011, Canada became the first signatory to announce its withdrawal from the Kyoto Protocol. Canada’s Kyoto target was a 6% [!] total reduction by 2012 compared to 1990 levels (461 Mt) However, in spite of some efforts, federal indecision led to increases in GHG emissions since then. Between the base year (1990) and 2008 Canada’s greenhouse gas emissions (GHG) instead increased by around 24.1%

In Warsaw, Japan and Australia also revealed their decreased ambitions to limit emissions…

At the same time a number of alarming scientific reports concludes that we need to reach “peak-emission” around 2020 to have any chance in reaching the max +2 °C goal.

When I, with this in mind, read a news report from the COP19 stating that “…the US, after years of lobbying, finally reached their goal – ensuring that a new International climate treaty in 2015 have to be non-binding” – I don’t know whether to laugh or cry.

We have ONE Planet – it’s a finite environment, and one of the largest CO2-emitters of all times demand that a treaty to save our existence on this planet should be “Non-binding”… 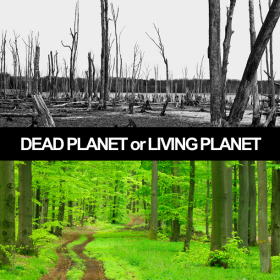 It is unbelievable that so many allegedly smart people still believe that there is a choice.

It is even more amazing when it’s so obvious that if you choose one of them you can have both, but if you choose the other one, scientific research have proved that we will lose both

“There is no prosperity on a dead planet

Based on this, and the fact that most of the CO2 that has been emitted has been done or is still being caused by the rich countries, the developing countries want to create a new mechanism to deal with ‘climate compensation’, while richer nations such as the US and the EU want to weaken these proposals.

Ed Davey, the UK’s lead “negotiator” stated:
“We don’t accept the argument on compensation. We never have and we’re not intending to start now.”

Justin Lee, Australian ambassador, heading Australia’s delegation following its decision not to send a minister to the talks, commented:
“Australia wants progress on negotiation of an agreement that sets up effective global action based on broad participation. Major economies and Australia’s key trading partners will need to participate and Australia will move in step with them, protecting our competitiveness.”

John Kerry, US Secretary of State, expressed in a leaked briefing memo to the US current negotiating team:
“concern about where all the talk of loss and liability would lead, worrying that it would be ‘counterproductive’ for the United States.” And was thereby continuing along the road to make certain that neither the word ‘compensation’, nor any other term connoting legal liability, is used, to avoid opening the floodgates to litigation…

Let me try to wrap my head around these statements – did they actually state that they are not prepared to pay their dues, not now and not in the future and especially not if it affects their economic competitiveness or could lead to litigation.

The developed world is then, if I understand this right, set to continue and probably even grow the extreme consumerism lifestyle, causing increased emissions, exploiting developing countries for cheap labor and resources, misusing their weaker rules and legislation, running complicated tax-evasion schemes and setting biased “free-trade” agreements etc… 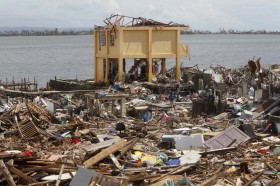 …and when the effects from Climate change, dominantly caused by the developed countries, is getting worse, hitting many of the poor and developing countries first and hardest they are supposed to solve this on their own as well…

– no wonder they walked out…

Interviews with some of the politicians involved in the climate treaty negotiations almost sounded as if they are living in another “parallel” universe, an infinite universe with no time limitations and where growth can go on forever, a universe where old flawed economic models still rules. At the COP19 it also became painfully obvious how infiltrated the political arena has become, with lobbyists and corporate sponsorship promoting the current status quo of extreme inequality and extreme consumerism.

With an increasing distrust in politicians ability to represent and act in the interest of the people, and with a huge lobby representing corporations and profiteers, promoting “business-as-usual” with seemingly no or little interest in saving our planet – the situation is becoming alarmingly acute. 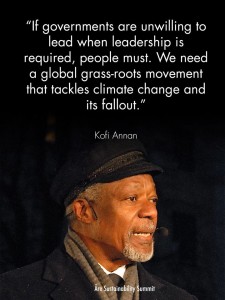 Kofi Annan, former secretary general of the United Nations, wrote in an op-ed in the New York Times, just two days after the COP19: (Link)

“If governments are unwilling to lead when leadership is required, people must. We need a global grass-roots movement that tackles climate change and its fallout…”

Has the political system become a “narrow-minded elite-club” promoting their own interest and ideas, joining forces with corporations and the “greedy” wealthy few, rather than representing people…?

– No wonder also many of the NGO:s walked out from the COP19 in Warsaw…

It seems as if it is up to us – The People – to increase pressure in our societies, to stubbornly continue asking questions, demand urgent action and to raise our voices because, as Martin Luther King Jr. once said, “Our lives begin to end the day we become silent about things that matter…”

Get knowledge, join together with others, join or support the NGO:s, raise the issue at every event, around the dining tables, at your workplace, in the board-meetings, with every available politician – share it in all Social Medias, this is an urgent matter that really deserve to become “Viral”

Together WE can make a difference and hopefully “check” only the third box in the featured “picture” of his article.

Kofi Annans speech one week prior to the COP, when he received the Reinhard Mohn Price.