A “Lagom” lifestyle – We must urgently reduce our Footprint…

Posted on 24 May, 2017 by Sören In CSR, Economy, Environment, General, Sustainability

Abundance, affluence, luxury – words closely interconnected with the lifestyle currently promoted as desirable by the western civilization, or rather, by medium to high income people according to Gapminder and Anna Rosling Rönnlunds latest tool “Dollar Street“…

When WWF published the Living Planet Report 2016 in October 2016, it became more evident than ever that humanity’s strain on our planet has yet again increased and is now even further beyond a sustainable level. We are now over-consuming our planets renewable capacity at a rate of 164%, rapidly depleting whatever “reserves/tolerances” our planetary system might or might not have.

When comparing WWF:s Living Planet Reports from 2014 and 2016, the most daunting insight is not that the top ten countries consumption has increased even more, with Luxembourg setting a new high at 15,8 Global Hectares per capita – almost 10 times what the planet sustainably can provide – it is that now 93 countries, representing 3.43 billion people are consuming above the global average (2,84 GHa) and more than 130 countries (4.06 billion people) consume above the available capacity (1,7 GHa/capita). Database includes a total of 187 countries.

…and the pursuit of continued growth is still the “Master Plan” for our society?

We need a new Master Plan – a more “Lagom” Lifestyle…!

The Myth: Growth at low percentage rate is no problem and can therefore continue indefinitely!

Most people have probably already seen the “planetary dashboard” – a set of 24 global indicators, charting the “Great Acceleration” in human activity from the start of the industrial revolution in 1750 to 2010, and the subsequent changes in the Earth System – e.g. greenhouse gas levels, ocean acidification, deforestation and biodiversity deterioration.
Many of these indicators show an almost exponential growth from the 1950’s and forward. 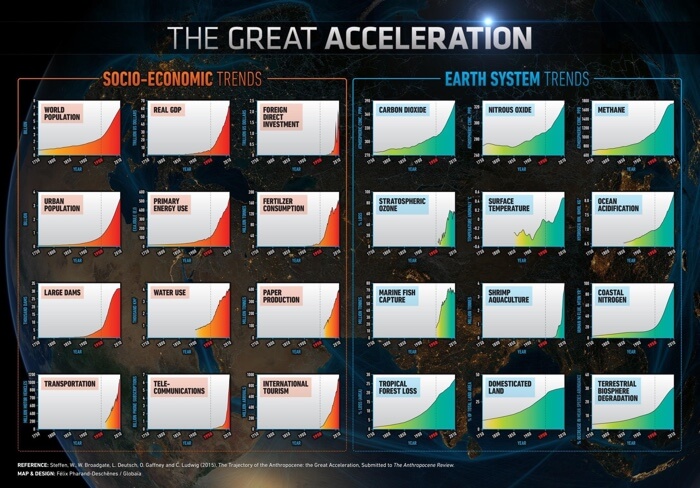 What many people still fail to understand is that a steady (linear) growth rate becomes exponential over time, e.g. a yearly growth rate of 5% results in a doubling of the original value in just 14 years.

Nobody explains what exponential means better than the late professor Al Bartlett in this short clip – “The greatest shortcoming of the human race…”:

Prof. Bartletts celebrated one-hour lecture on “Arithmetic, Population and Energy” is an ingenious explanation of the concept “steady growth”- it can be found here.

We must debunk the Myth and clarify that infinite growth, although the percentage of small numbers, causes exponential growth, and is eventually impossible in a finite environment.

The Myth; “If we only can decouple the economy from increasing carbon emissions – growth can continue unabated…” 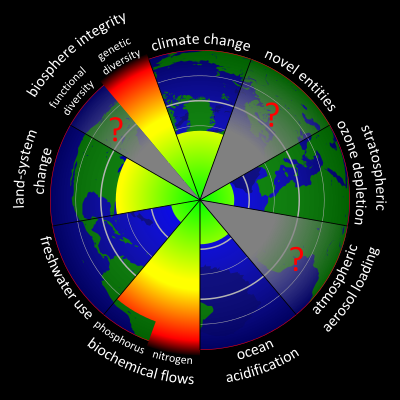 The earth is a finite place – Planetary boundaries

“Our economy and society ultimately depend on natural resources: land, water, material (such as metals) and energy. But some scientists have recognised that there are hard limits to the amount of these resources we can use. It is our consumption of these resources that is behind environmental problems such as extinction, pollution and climate change.

Even supposedly “green” technologies such as renewable energy require materials, land and solar exposure, and cannot grow indefinitely on this (or any) planet.

The decoupling delusion simply props up GDP as an outdated measure of well-being.

Buying weapons, engage in war, building country dividing walls, manufacturing cars, drill for oil, consume goods as well as defensive consumption (buying security fences, weapons for private protection, private insurance etc) to protect oneself against environmental degradation – and, while some are very detrimental to human well-being, they are all crucial contributors to GDP [!?] 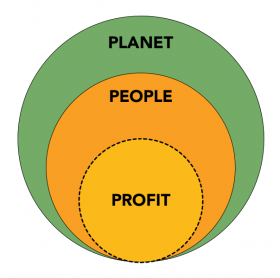 Humanity (and our economy) is completely dependent on
a prosperous society on a prosperous planet!

Rather than fighting and exploiting the environment, we need to recognise alternative measures of progress. In reality, there is no conflict between human progress and environmental sustainability; well-being is directly and positively connected with a healthy environment.

We need to re-couple the goals of human progress and a healthy environment for a sustainable future.

…do we need to “give up” everything?

Whenever a reduction of consumption is brought forward or is even being discussed, it immediately triggers the “Extremes” – usually creating a debate with a focus on the most diametrical opposites – creating almost insurmountable chasms between where we are today and where we need to be.

There is of course an element of “fear-of-change” in this reaction, but it also shows how a continuously repeated message; “Growth in the only solution” over time has become an unchallenged doctrine.

In reality our society is continuously changing, we just need to tweak the direction in a way that we don’t go over the edge. We need to stay within the planetary boundaries – there is simply no option! 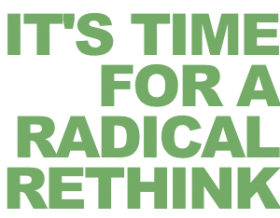 We need to re-evaluate many things!

The first chapter in Naomi Kleins book “This Changes Everything” is titled;

“The Right is Right”

Referring to the fact that Skeptics and Climate Change Deniers, quite often found at the “right side” of the political arena, are right about One thing!

Not about the science – which they are completely wrong about – but the political implications such radical interventions in the economy would have, transforming how we live – It Changes Everything!

This is probably also why hardcore [neo-liberal] capitalists and free-market advocates are among the first one’s to deny Human induced Climate Change – because it contradicts their basic ideologies.

But it is not about politics, it is Common Sense – “Within a finite environment, such as our planet, infinite growth and exploitation is not possible!” Eventually resources will run out, unless we can create a fully “closed-loop“.

Our future on this planet is dependent on a new paradigm, a new “Master Plan” – Consumerism, the way it is pursued today, is rapidly depleting and destroying the very foundation for our existence.

It is not rocket-science and it doesn’t take extreme mathematical knowledge to understand.
If our planet sustainably can provide 1,7 Global Hectares (GHa) per capita – then 1,7 GHa is what we have! Everything else is about fair distribution.

…the gluttony and egoism we see today, often disguised behind catch-words such as “America first”, “beating the benchmark” or populistic expressions to “close borders” or “stop immigration” is otherwise probably just a prelude of what is about to happen…

For decades the consumerism-mantra has been “Not because you need, but because you can!” – in an effort to convince us all that; “What you can afford is who you are…”

“…a really futile paradigm – and humans are supposed to be the smartest species on this planet…?”

Unless we can adapt, unless we can leave “fossilized consumerism behaviors” behind and reduce the footprint of our lifestyle – develop “A Lagom lifestyle” for all – we are history…!

But guess what – Change is always easier than we think…!

Of course there is always an initial hurdle to overcome, but in most cases this hurdle is only existing in our minds – and when you look back at the changes you have already done in life, a quite common reflection is; “Why was I reluctant in the beginning…”.

Think a little about who really makes Your choices in life, is it really You or is it someone or something else telling you; “What you can afford is who you are”…! Perhaps is it trends defined by others, fashion defined by others and so on… Perhaps is it the “friendly competition” in social medias, “bragging” about “a life extraordinary”…

Is it really “must-have” or “must-buy” or is it a need defined by others…?

…Not to little, not too much – Just right…
A Lagom Lifestyle