Posted on 28 October, 2012 by Sören In Environment, General

The 350.org was founded in 2008 by U.S. author Bill McKibben, who wrote one of the first books on global warming for the general public, and a team of university friends. 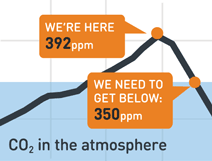 “350 means safety from the climate crisis. To preserve our planet, scientists tell us we must reduce the amount of CO2 in the atmosphere from its current level of 392 parts per million (ppm) to below 350 ppm. But 350 is more than a number—it’s a symbol of where we need to head as a planet.”

In December 350.org lead by Bill McKibben is launching a road-tour across the USA trying to motivate campuses to divest their funds from the fossil-fuel business. An initiative based on the way campuses once successfully where pursued from investing their money in companies with interest in the, at that time, apartheid country South-Africa. The message is based on Bill’s article in the Rolling Stone magazine “Terrifying New Math” and is called “Do the Math Tour”.

In June next year 350.org is gathering 500 young people in Istanbul to launch an even bigger movement around the world, a “Global Power Shift”

350.org online campaigns, grassroots organizing, and mass public actions are led from the bottom up by people in 188 countries.

If you have never joined an organisation or been an activist – here is the one!